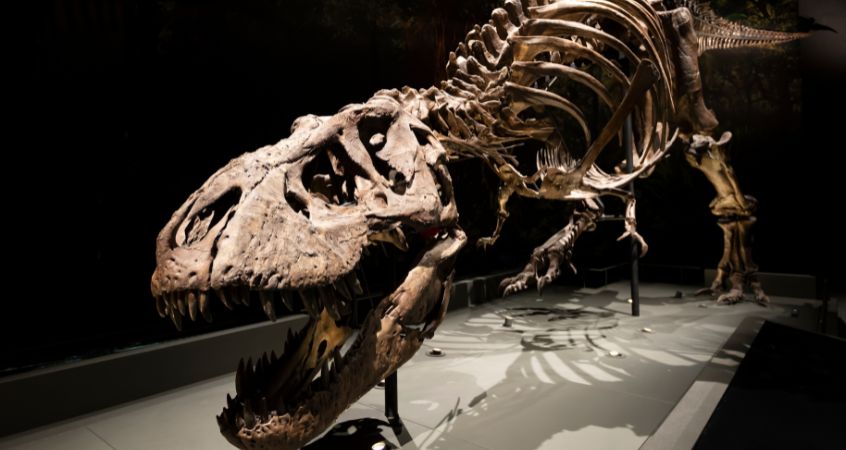 The Mesozoic era has long captured humanity’s imagination. Often, we imagine it as a time when the earth was comprised of a tropical jungle landscape peppered with volcanoes and teeming with those colossal titans of the period—dinosaurs.

Of course, many of these pictures are more based on science fiction than fact. During this time, you could still find snow and deserts on Pangea, and although there were large volcanic events, they didn’t span the entire era. And just as there are plenty of misunderstandings about the terrain of the period, there are plenty of misconceptions about Mesozoic era dinosaurs.

Dinosaurs Were the Only Creatures on Earth

While dinosaurs were the star attraction during this period, they were far from the only creatures roaming the earth. During this era, mammals first started walking the land, and a host of non-dinosaur marine life populated the oceans, such as placodonts and sharks.

Additionally, not every large reptile on the earth was a dinosaur, even those with names ending in the suffix -saur. For example, the ocean-dwelling ichthyosaur isn’t considered a dinosaur, nor is the high-flying pterodactyl.

Most movie and TV dinosaurs tend to boast neutral or earthy-colored scales unless they’re the star of a happy-go-lucky preschool show. As it turns out, real life may have been more colorful than we imagine.

While there is very little we can say about the color of most dinosaurs, scientists were recently able to find melanosomes for a particular dinosaur, the Sinosauropteryx, that showed it was likely a striped creature. And if this is true for one dinosaur, there are a whole host of possibilities for others.

And these melanosomes came from feathers rather than dinosaur scales. Many of the most popular dinosaurs, such as the T-rex and velociraptor, were actually covered in feathers for at least part of their lives. Though some species, like the duckbill dinosaur, seem to be as scaly as Hollywood painted them to be.

Of all the misconceptions about the Mesozoic era, this is arguably the most surprising. After all, the period was known for mass extinctions, and the one that wiped dinosaurs off the planet is the most famous. But even though you’ve never seen a triceratops or brontosaurus, you probably see descendants of dinosaurs every day in the many forms of birds.

Birds are the direct descendant of the dinosaur, hence the fact they have feathers just like their prehistoric ancestors. They also have the same hole in their hip socket that’s been commonly used to identify a species as a dinosaur. The next time you go feed the birds in your local park, you can tell your friends you’re off to feed your local neighborhood dinosaurs.

But if you’re looking for something a little more fearsome to bring home than birds, check out our beasts of the Mesozoic figures for some of the most accurate dinosaur figures available today.