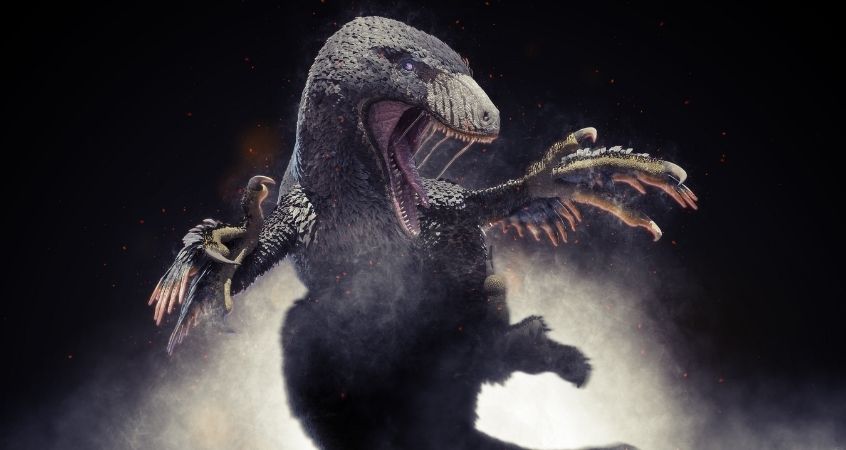 When we think of the raptor species, the velociraptor is often the type that comes to mind. That’s because of its ever-popular cinematic presence in a variety of blockbuster movies, TV shows, and books. Though the velociraptor is certainly notable, getting to know the other common types of raptor dinosaurs will expand your comprehension of these dromaeosaurid (feathered), carnivorous beasts of the Mesozoic Era.

The word “velociraptor” means “swift seizer.” Velociraptors lived in the late Cretaceous Period and were theropods, meaning they had hollow bones and three-toed limbs. These beasts’ fossils show evidence of quill knobs, declaring them feathered dinosaurs that were about the size of turkeys—unlike what we often see depicted on the silver screen. They were bipedal, meaning they walked on two feet, and they held their clawed “hands” in front of them. Their sickle-shaped claws were used to disembowel their prey.

The word “balaur” was derived from the name of a multiheaded dragon in Romanian folklore, while the word “bondoc” means “stocky” in Romanian. The Balaur bondoc (“stocky dragon”) also roamed the Earth in the late Cretaceous Period. Its remains have been found scattered throughout Romanian territory. Early fossils suggest these creatures were similar to velociraptors, although the Baulaur bondoc had short limbs that were heavier than those of other raptor types. This creature is also believed to have had greater musculature than other types of raptors, and it had not one, but two retractable claws on each foot. Scientists suggest a strong relationship between the Balaur bondoc and modern birds.

The bambiraptor was named Bambiraptor feinbergi in full after the Disney character Bambi. The literal translation of this creature’s name is “Bambi thief.” Wes Linster, a fourteen-year-old fossil hunter, discovered its skeleton in 1993 in Montana’s Glacier National Park. The discovery of the almost complete set of remains opened more discussion on theories regarding bird evolution from dinosaurs, further linking dinosaurs such as this one to birds.

The bambiraptor is said to have had long hindlimbs, suggesting it could run fast. Its arms were also long so that it could reach its hands to its mouth when eating. Additionally, it had a wishbone, which we see in modern birds. Its claws are believed to have contained first and third fingers that were opposable.

This species existed in the early Cretaceous Period. Its fossils have been discovered scattered throughout the northwestern United States; however, its teeth have been found on the east side of the country in Maryland. This creature led scientists into the “dinosaur renaissance” of the late 1960s, sparking a debate as to whether dinosaurs were warm- or cold-blooded. Scientists once believed all dinosaurs were giant reptiles, but during this time, they started to have doubts about this theory.

On each hind foot, the Deinonychus had a “terrible claw” that was unusually large and sickle-shaped. These animals were larger than other types of raptors, as they could grow up to eleven feet long. The velociraptor shown in movies is a closer depiction of the Deinonychus.

The word “dromaeosaurus” means “swift running lizard.” This species lived during the late Cretaceous Period and was first discovered in the Dinosaur Park Formation in southern Alberta, Canada, by paleontologist Barnum Brown in 1914. Teeth believed to have belonged to this beast have also been discovered in the Prince Creek Formation in Alaska.

Despite the information we do have on this creature and its depictions in books, we can’t tell a lot about it from its fossils. Full skeleton casts of this dinosaur are only possible based on knowledge we’ve obtained about other, more recently discovered dromaeosaurids.

This creature of the late Cretaceous Period lived in what we now know as China. This bird-like dinosaur was about six feet long, and it’s best known from an almost complete skeleton that was discovered in 2008. This theropod dinosaur weighed only about fifty-five pounds, and it’s believed to have been fast and incredibly agile when hunting prey. It had a large claw on each foot, an elongated skull, and a curved neck.

It lacked a lot of the common features of other dromaeosaurids—it’s more closely related to Tsaagan mangas (another carnivorous dinosaur from the late Cretaceous Period). Scientists believe this creature lived in an arid desert habitat.

This animal was a bird-like theropod of the late Cretaceous Period that lived in what is now northwestern Madagascar, Africa. This predator was smaller than other raptor types, at just over two feet long. Its fossilized remains were first discovered in 1995.

There is very little evidence regarding the existence of rahonavis, with the exception of a single specimen. This showed that the rahonavis had hind limbs and a trunk and that it was about the size of a modern raven. Based on evidence of ligament attachments on the shoulder bones, this raptor type appears to have had wings.

The final dromaeosaurid theropod dinosaur of the late Cretaceous Period to discuss in this framework of common types of raptor dinosaurs is the saurornitholestes. Like some of the other raptor derivatives, it was bipedal and had a sickle claw on each foot. It had long legs, and though it bore resemblance to the velociraptor, it was more lightly built. The holotype specimen was unearthed in the Dinosaur Park Formation in Canada.

Considering all the different types of dinosaurs associated with a particular genus or species can be a little mind-boggling. How do paleontologists and other scientists differentiate between them? We know that between the different types of raptors, there were many commonalities. Even with different bodies, builds, and sizes, these dinosaurs were almost always carnivorous, and they used sharp, sickle-shaped talons to hold and tear apart their prey. Today, they’re also commonly associated with birds.

Creative Beast Studio has created an entire raptor series to bring these creatures to three-dimensional life for further exploration and appreciation of all the animals that inhabited this planet long before humans did. We also offer a variety of model kits that allow you to build a raptor of your own and note how its features differ from what you’ve seen on the silver screen.