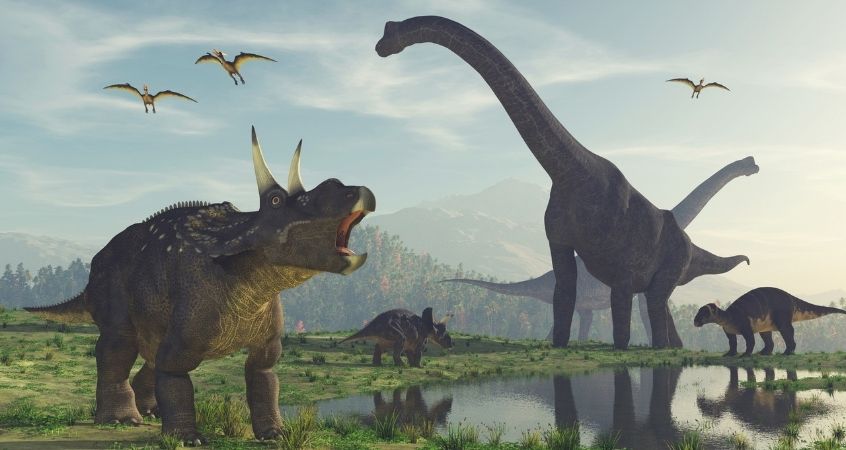 What exactly did dinosaurs eat? Some of the biggest dinosaurs only ate plants, while the ferocious T. rex had a diet of meat. Interestingly, dinosaur diets weren’t as simple as some people may believe. Uncover everything you need to know about dinosaur diets so that you can start spreading the knowledge!

The argentinosaurus was among the largest creatures to walk the Earth, and it only consumed plants—in fact, many of the biggest dinosaurs were herbivores! Based on fossil evidence, we know that many dinosaurs from the Mesozoic Era had plant-based diets and consumed various plants. Some of the many plants they ate included cypresses, pines, yews, redwoods, and mosses. These vegetarians had flat teeth that allowed them to pull leaves from trees and grind them down.

Interestingly, we don’t have proof that dinosaurs were truly omnivorous. However, scientists have discovered plants in the poop of dinosaurs that seemed to eat meat. If omnivorous dinosaurs did exist, then they most likely ate plants as well as eggs, fruits, and insects. Omnivorous dinosaurs would have eaten what was available to them given their location and potential prey.

When we think about dinosaurs, the T. rex immediately comes to mind for most people. It was an apex predator with large, sharp teeth because it was a carnivore. Meat-eating dinosaurs had serrated teeth, strong legs, and sharp claws so that they could catch and consume prey. Most ate what they could hunt, including other dinosaurs, fish, insects, and small animals. Just like some of the carnivores we see today, many dinosaurs, such as the velociraptor, likely hunted their prey in packs.

While most dinosaurs probably hunted for their food, many scientists believe that some possibly scavenged. When they couldn’t hunt, these scavengers would’ve eaten dinosaur eggs or even dead dinosaurs.

Scientists have also discovered that dinosaurs ate a variety of foods. Although some dinosaurs had rounded teeth to grind leaves as they ate from the tallest trees, others had sharp teeth for tearing, as their diets included other dinosaurs.

As you show off your knowledge of the Mesozoic Era, why not buy the perfect dinosaur figurine? Creative Beast Studio sells factually accurate figurines, whether you’re shopping for a Velociraptor figure or another beast of the time!