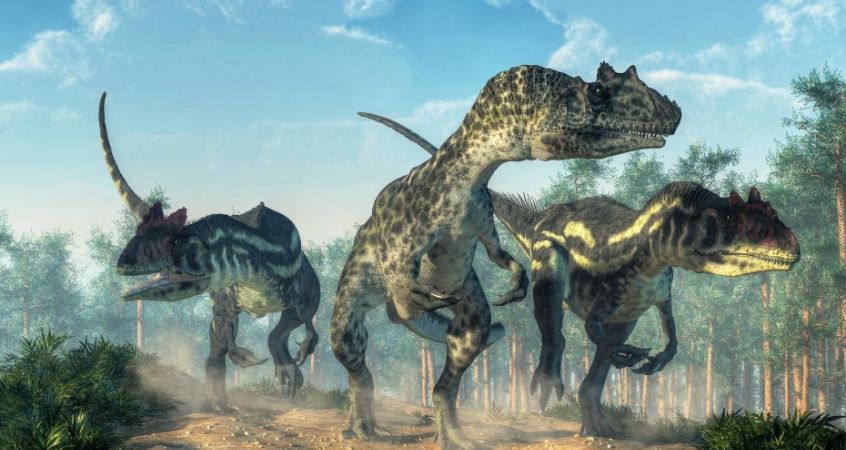 A lot can be told from the remains of dinosaurs. Fossils provide us with information about the height, possible weight, body movements, diets, and even skin color and texture of many prehistoric beasts. The unearthing of these creatures has given us great details about some of the biggest, baddest dinosaurs ever to walk this Earth. We already know that the Tyrannosaurus Rex was a fierce predator with eagle eye vision and razor-sharp teeth—but what were some of the other equally as interesting, dangerous beasts that existed?

The Allosaurus was a theropod (three-toed-limbs) that existed during the late Jurassic Period. Its name means “different lizard” and refers to the concavity of its vertebrae. The Allosaurus stood about thirty to forty feet long, and researchers believe it was far deadlier than the Tyrannosaurus Rex. Remains of this creature indicate that this strong-jawed, carnivorous beast roamed the western United States. Though scientists believe the Allosaurus was one of the most aggressive dinosaurs, they realized that perhaps they were not as smart as other species after finding a group of adult Allosaurus remains that had been trapped in muck in a quarry in Utah. It appears that their killer instincts overruled their survival ones as they perished over a trapped prey.

The Ankylosaurus was an armored dinosaur—a projected image of one gives off strong Pokémon vibes. Its discovered fossils date back to the late Cretaceous Period and were unearthed at various sites in western North America. This is believed to be one of the last non-avian (unrelated to birds) dinosaurs. A close relative of the Stegosaurus, the Ankylosaurus had a thagozmizer, or a defensive tail spike. The tail of this beast weighed about one hundred pounds and was used as a club or mace in defense. This tail was so destructive that a good swing could break a Tyrannosaurus Rex’s leg or knock out its teeth. Picture a twenty-five-foot-long giant turtle with a spiky shell and swinging tail.

Though an herbivore, the Argentinosaurus is one of the biggest, baddest dinosaurs that ever lived. Spanning from seventy-two to one hundred ten feet in length, this “Argentine lizard” lived during the Late Cretaceous Period and weighed anywhere between one hundred thousand to two hundred twenty thousand pounds. This beast may not have been one of the “baddest” dinosaurs of all time, but it was certainly one of the biggest.

The Carcharodontosaurus existed during the Cenomanian stage of the mid-Cretaceous Period in Northern Africa. This carnivorous beast spanned somewhere between twenty-five to forty-five feet in length. Carcharodontosaurus means “great white shark lizard” due to its shark-like teeth. Though this beast was not larger than a Tyrannosaurus Rex, it has also been referred to as an African T-Rex because of its similar features.

The Gigantosaurus was a genus of theropod dinosaur that existed in the late Cretaceous Period in the area now known as Argentina, South America. This apex predator ranged between thirty-nine to forty-three feet in length. During the time of the Giganotosaurus’s existence, it was one of the biggest, baddest dinosaurs around; in fact, it was one of the largest dinosaurs to ever walk the Earth.

The Mapusaurus was a giant carcharodontosaurid (shark-toothed lizard) that lived during the early Late Cretaceous Period in the South American countries now known as Argentina and Chile. It spanned between thirty-three to forty-two feet in length. It was a close relative of the Giganotosaurus, thus sharing many similar features, although it was believed to have been slightly larger in size. Its teeth were like narrow blades used to slice open its prey, and it hunted some of the largest dinosaurs that ever lived, such as the Argentinosaurus.

The Saurophaganax dinosaur was a genus of allosaurids (large bipedal carnivores) found in the United States where Oklahoma is located now. They existed in the late Jurassic Period and were anywhere from thirty-four to forty-three feet in length. The Saurophaganax was the largest theropod to have existed and was likely very close in size to the Tyrannosaurus Rex. It has been deemed one of the largest and longest terrestrial carnivores of all time.

The Spinosaurus was a genus of spinosaurid (therapod of up to twelve known genera) dinosaur. This “spine lizard” lived during the Late Cretaceous Period and was the first swimming dinosaur to have ever be discovered. At nearly fifty-feet-long, the Spinosaurus is considered the biggest predatory dinosaur we have found so far. Its physical features entailed a long crocodile-like snout and a large sail on its back. Its short legs made for good paddles in water. It was able to breathe underwater to catch prey and surfaced like a shark to attack land-bound dinosaurs with its powerful croc-like jaws. Its feet gave this creature the ability to travel onto land to terrorize through its strength, claws, and speed in water. All those combined with its massive size made this beast one of scariest dinosaurs in the world.

The Ultrasaurus was in the genus of sauropod (large, four-legged, herbivores) dinosaurs. We know the Brontosaurus better than we know this beast, but this “ultra lizard” is believed to have been the strongest dinosaur that ever lived. It roamed in what is now known as South Korea, Asia. There are very few fossils related to this massive creature and leaves much to still be determined by scientists today.

The Utahraptor was the largest known member of the genus of dromaeosaurid (feathered theropod) dinosaur. Though their relatives such as the Deinonychus and Velociraptor get most of the attention in cinema and books, the Utahraptor was one of the most aggressive dinosaurs. This beast is estimated to have weighed almost a ton and was a vicious predator with nine-inch-long, sickle-shaped, sharp claws to tear apart its prey. This giant raptor lived during the early Cretaceous Period in the area now known as Utah, USA, and its name means “Utah predator”.

All of these dinosaurs were huge, but as far as the scariest dinosaur in the world, the winning vote seems to go to the Spinosaurus for being the deadliest beast able to both lurk in bodies of water and leap onto land to take its prey down. In short, this was a dinosaur that should not have been underestimated. Creative Beast Studio continues to create beasts of the Mesozoic figures to shed light on and educate curious minds on the many types of dinosaurs that existed throughout history. These are simply some of the biggest, baddest dinosaurs ever. Constant research and development continue to give us more details about these seemingly mystical creatures.