WHAT IS CYBERZOIC? It’s finally time for us to take our first glimpse at this new world!
‘In the distant future, the remnants of humanity are in a struggle to earn their right to survive on a new planet, protected by the formidable ‘Dragons’. With limited defenses, Earth’s mightiest beasts are resurrected through science and technology, giving the humans more than a fighting chance against the reptilian natives. But after splitting into several opposing clans, humanity’s biggest threat may still be themselves.’
It’s been nearly a year since I began working on Cyberzoic with talented concept artist Ross Persichetti, who did the awesome concept art that you see here. These two images depict the main clan of the story called the Technologists, one of the five human clans, each having a unique look.
Here are some key facts about the line:
– The dinosaurs will have cyber-enhanced armor (hence the name of the era) but there are no cyborg dinosaurs or cyborg dragons
– the dinosaurs are just as scientifically accurate as they are in Beasts of the Mesozoic, and the same figure molds will be used allowing for extra compatibility with BotM.
– this is a sci-fi story, but is still grounded in our own reality, albeit in the future. Thus BotM could be seen as a ‘prequel’ to this story.
-there will be plenty of humans and a few robot characters, many of which are planned for the 3 3/4″ figure treatment.
-Each Cyberzoic dinosaur release will have a BotM counterpart color, thus a ‘female’ (CZ) and ‘male’ (BotM) version of each species. However many BotM releases will still be exclusive to that line.
– A mini comic with the on-going story is planned to come with each figure.
– Two preview figures will be first- Utahraptor and Achillobater. The remainder will be supported via crowdfunding, though the platform is yet to be determined.
-Cyberzoic is not limited to just dinosaurs, as the story incorporates wildlife from multiple eras which could also be made as action figures later on.
-some existing BotM figures will be reintroduced into Cyberzoic with new colors, including but not limited to: Yutyrannus, Tyrannosaurus rex, Dryptosaurus, Triceratops, Styracosaurus, and Diabloceratops.
– the ‘Dragons’ will follow a natural history aesthetic as compared to the traditional ‘fantasy’ look. These figures will vary in size and will be released less frequently than the dinosaurs.
Also shown here is the initial list of the planned dinosaur species to be created for Cyberzoic. (There will be additional new species for BotM which will be announced later.) Families such as Hadrosaurs, Ankylosaurs, Spinosaurs, Sauropods, and many others are expected to be introduced later if the line is successful, but we can only commit to so many figures at once if they’re to be given the proper attention. I’m sure there will be plenty more questions so feel free to ask below!
I’m very excited to have the opportunity to bring this line to life and I hope that it finds the support that it needs. There will be much more progress and announcements in the months to come, so get ready… the CYBERZOIC ERA HAS BEGUN. 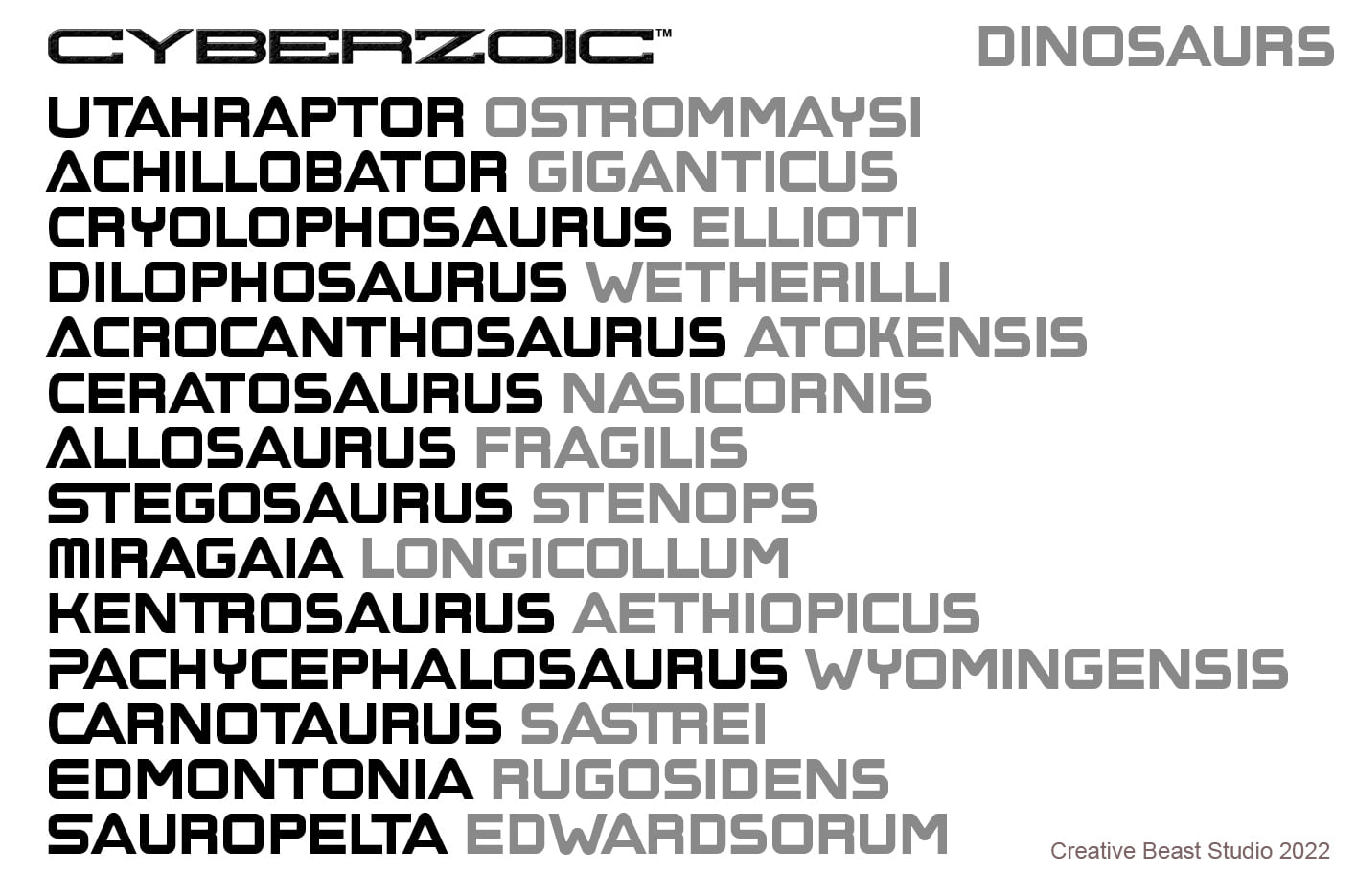