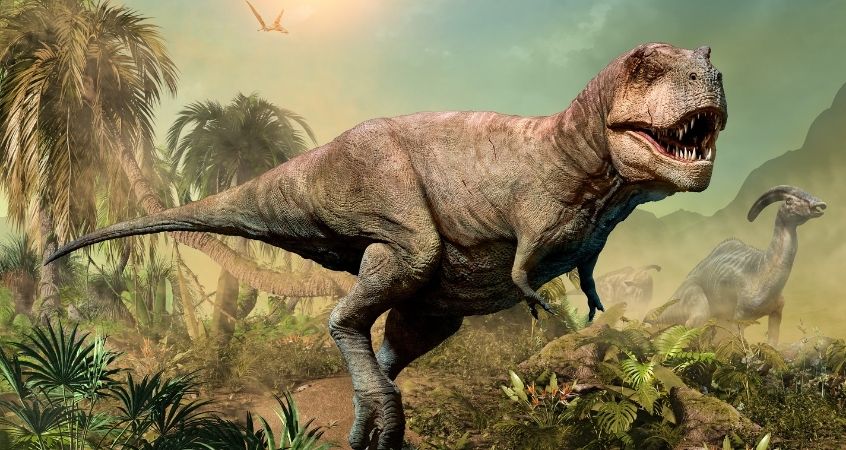 Each of the three periods of the Mesozoic Era saw dangerous beasts roaming the Earth, including the Cretaceous Period. Infamous beasts like the ferocious Tyrannosaurus rex and the docile Triceratops were among these creatures. Curious about what other fearsome dinosaurs walked our planet at this time? Make fascinating discoveries about these beasts in this information-packed article!

You can’t have a conversation about dinosaurs without bringing up one of the most famous. This “tyrant lizard”—the meaning of Tyrannosaurus rex—was among the largest meat-eating creatures on land. Not only were they large, but they also had pretty long lifespans at around 30 years. Despite their large size, they could run at around 17 miles per hour, which came in handy when chasing a meal.

T. rexes were apex predators, so what was the point of those tiny arms? It turns out their arms were short to make it easier to reach their mouths as they ate, but scientists have discovered that their arms may not have been as small as previously assumed.

The Utahraptor walked Earth during the beginning of the Cretaceous Period and was one of the largest raptors around. One feature that made this predator threatening was their sharp claws; Utahraptors had nine-inch talons on their hind feet.

Including a plant-eater with the most dangerous dinosaurs of the Cretaceous Period may raise an eyebrow. After all, herbivores don’t seem too fearsome because they lack the razor-sharp claws associated with carnivores and do not hunt other dinosaurs. However, you wouldn’t want to go toe-to-toe with plant-eaters like the triceratops. Their horns made a perfect defense weapon.

At Creative Beast Studio, we sell realistic dinosaur figures, including beasts of the Mesozoic Ceratopsian. Add this remarkable herbivore to your beast collection.

The Carcharodontosaurus was nearly 43 feet long and around 15 feet tall, making it one of the largest carnivorous dinosaurs. Scientists usually find fossils of this theropod in North Africa and suspect it lived in packs. Like the T. rex, they were the apex predator of their habitat.

The Giganotosaurus is yet another member of the most dangerous dinosaurs of the Cretaceous Period. While we assumed for years that the T. rex was the biggest carnivorous dinosaur, this is likely incorrect. Most evidence proves the Giganotosaurus was bigger. Of course, these two beasts weren’t enemies because they lived during different parts of the Cretaceous Period in separate landscapes. One commonality amongst all these beasts is that they were undoubtedly intimidating.