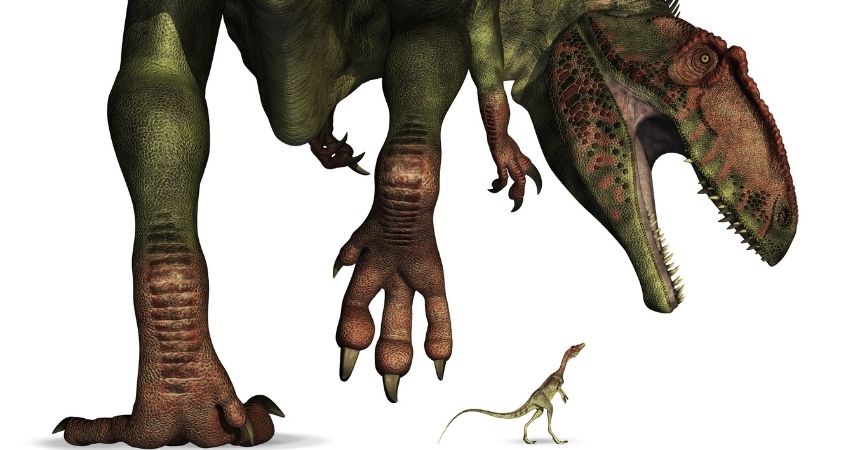 Unearthed by people, animals, and even weather conditions, there are constant new findings on the beasts of the Mesozoic Era. Researchers never have a dull moment when it comes to hidden dinosaur remains throughout the Earth. For example, for decades the Compsognathus was thought to be the smallest dinosaur that existed, but we later discovered that other species ranked among the tiniest dinosaurs on Earth.

Researchers believe the Caenagnathasia to have been about two feet in length, weighing about three pounds. It’s the smallest known non-avian (non-bird) oviraptor (a feathered, lizard-like dino). This theropod (a three-toed animal) was a carnivore, which we only know from its jaw material, even after the findings of an upper leg and vertebrae.

The Microraptor, whose name translates from Latin to mean “one who seizes,” was a small, four-winged paravian (bird ancestor) that has given us several well-preserved fossils to study in China. This creature ranged in length from two-and-a-half to four feet long and weighed just over two pounds. You can further inspect its physical features by studying Creative Beast Studio’s high-quality dinosaur models.

The Parvicursor (meaning “small runner”) is a genus of Maniraptora—advanced theropods, possibly even birds—with fast, slender legs. These creatures were just over a foot in length, and they weighed about a third of a pound. They’re one of the smallest known non-avian dinosaurs.

The discovery of the skull of an Oculudentavis (meaning “eye tooth bird”) brought us the smallest dinosaur to ever be found. This bird-like animal would have weighed less than a tenth of an ounce. Its length was less than two inches long. It was discovered in a drop of amber after being preserved for just under one hundred million years. Though this creature was miniscule in size, it had an astounding number of sharp teeth, suggesting it was a predator that most likely fed on small arthropods (insects, spiders, and crustaceans).

It’s astounding how dinosaurs toed the line between reptile and bird. The world was clearly much different in prehistoric times. Taking a look at the tiniest dinosaurs on Earth has to leave you wondering about these pet-size predators lurking about. Even the tiniest of them all fed on prey!