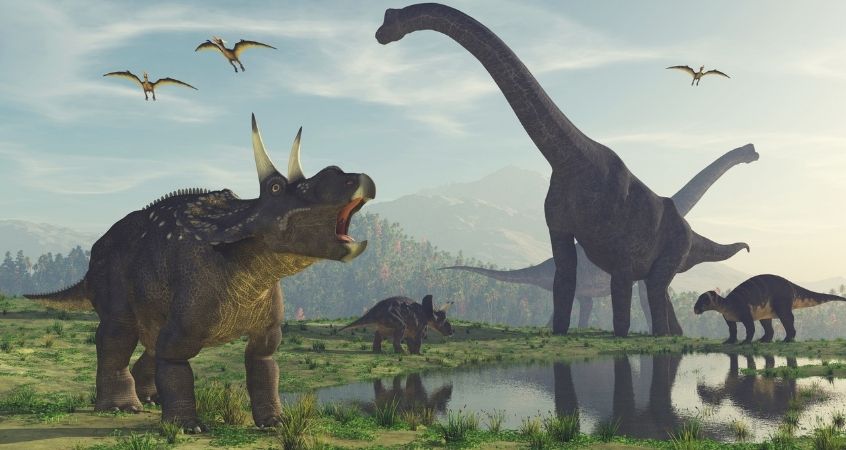 As we know, there is much we still don’t understand about dinosaur life. Without the existence of humans in the Mesozoic Era, we have to make a lot of educated guesses. Luckily, there is a multitude of scientific evidence to lend guidance on our journey to uncovering information about dinosaurs. Understanding the true colors of dinosaurs is a piece of the puzzle that paleontologists and researchers have started to make some headway on.

More recently, scientists have discovered a way to use melanin (pigment) that we find in our skin, hair, and the iris of our eyeball. Using melanosomes, where we store melanin, we can draw conclusions about the coloring of different dinosaurs. For now, scientists can track melanosomes in fossils of dinosaurs that had feathers or small hairs on their bodies, referred to as “dino fuzz.” The Microraptor was one of the most notable of these feathered creatures. These four-winged beasts have given us some of the most well-preserved fossil specimens known to exist and are available in Creative Beast Studio’s intricate action figures.

We have been able to recover some other dinosaur remains with feather or dino fuzz intact, as well, enough to test the different types of melanin present. Pheomelanin displays as a reddish tint, whereas eumelanin would make an animal blacker in appearance. The discovery of melanosomes in dinosaur remains has generated some exciting findings in the dinosaur research community and brought us another step closer to properly depicting the actual coloring of different dinosaur species.

Some researchers believe that dinosaurs may have been dull in color based on large warm-blooded animals that exist today, such as elephants and rhinoceroses. Though that may be true for some, there are several factors to consider when making assumptions about the coloring of these great beasts.

The food chain was quite competitive in the time of the dinosaurs. Many dinosaurs’ colors may have changed to help them hunt prey or hide from predators. Like the skin of a chameleon, many dinosaurs may have been able to adjust to blend into their surroundings to avoid combat.

The third dinosaur for which researchers have been able to deduce coloring based on their fossils were the Psittacosaurus dinosaurs. Using their melanosomes, scientists believe the Psittacosaurus could adjust quickly in coloring and pattern to blend in with their surroundings to avoid falling prey to nearby predators.

In addition to the possibility of camouflage coloring in dinosaurs, experts theorize that some animals used color to attract a mate, similar to how a male peacock uses its colorful tail to attract a companion. Attempting to understand the true colors of dinosaurs means applying knowledge of the size, type, and possible behaviors of each animal.

Another option is that some species used specific coloring to mimic or attract other animals, most likely prey, the way squid do. Patterns and colors can trick animals into getting too close to dangerous predators. Different species may also show dominance by adjusting the hue of a color to be less or more vibrant based on how threatened the animal feels. This adaptation is currently present in Atlantic salmon, which darken in color to signal submission.

There are various ways to compare the features and characteristics of dinosaurs to modern-day animals. Though the animals were much bigger in prehistoric times, the rules of survival are still the same. Coloring was and is important for many reasons. Creative Beast Studio offers a selection of dinosaur resin model kits for sale to allow you to decide the perfect colors and patterns for various prehistoric creatures. Every day, we get one step closer to understanding each animal’s physiognomies and the explanations for them.