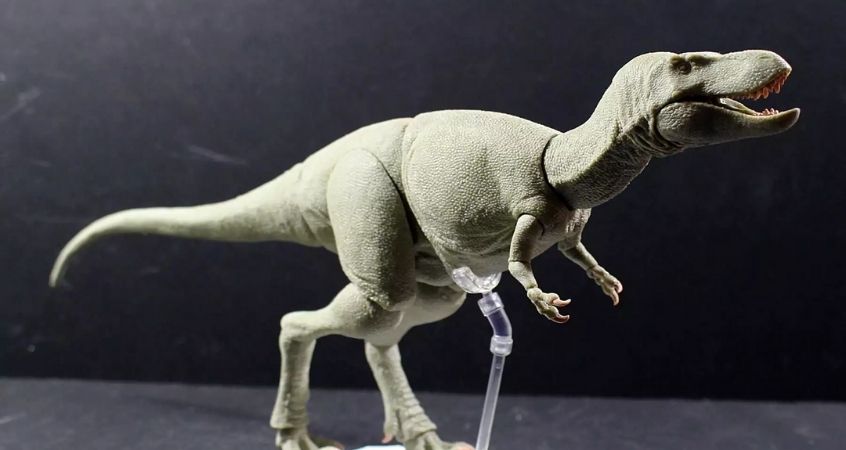 From the Jurassic Parks and Worlds to many other Hollywood fabricated images of the T-Rex, we are left with a lot of questions as to what characteristics are factually represented. Though with merely the bones of the prehistoric beasts to form our hypotheses, things are made more difficult, and researchers have drawn some pretty astounding conclusions. What you don’t know about the Tyrannosaurus Rex may surprise you, as well as give you a truer image of this creature.

Though the Tyrannosaurus Rex was a bipedal dinosaur, meaning it used two legs for walking, it had two arms as well. Over time, the T-Rex’s tiny arms have been an ongoing joke, represented in many cinematic depictions. Relative to the size of the T-Rex, which as an adult stood at about a range of twelve to twenty feet tall, the arms appeared small. Though short, the T-Rex’s arms were about three feet in length with razor-sharp talons as claws.

Many witticisms surround the T-Rex’s short arms; however, research suggests that the arms were very strong, with the ability to lift up to at least four hundred pounds. With a mighty jaw and a large stature, it is proposed that the sharp claws were used to pull prey close, tear into it, or hold onto it while attacking and eating. Regardless of the humor surrounding this animal’s short arms, they proved to be quite useful in many ways.

Other Physical Features and Characteristics

Through investigation over time, we have found that many dinosaurs may have had feathers. Some Tyrannosaurus Rex fossils have been originally thought to hint toward feathers, suggesting that the T-Rex may have been a dromaeosaurid, or a somewhat feathered dinosaur.

For a short time, this theory was popular in the dinosaur community, but it was disproved soon after. Years following the birth of that concept, there were discoveries of Tyrannosaurus Rex skin impressions, proving that this beast was likely to be covered in small scales on various parts of the body.

Creative Beast Studio has created a prototype model of a juvenile Tyrannosaurus Rex. This detailed representation is one example of a not yet available, but upcoming series. Following a Tyrannosaur Series Kickstarter projected to begin this summer (2021), with prototypes for each dinosaur in the series available for observation. The model kits with accessories of multiple Tyrannosaurid species will be available for purchase next year.

This concludes that the imageries we’ve seen in the movies regarding this dinosaur are false because you could not simply hide from this creature by not moving. Even the slightest movement could be detected by a great beast like this. The vision would leave potential prey unable to hide and remain unseen.

In some species of reptiles that exist even today, we see a pattern of cannibalistic behavior in animals such as crocodiles or the Komodo Dragon. We can assume that because the T-Rex was near the top of the food chain, they could hunt each other.

Based on discoveries of Tyrannosaurus Rex remains, there are bite marks and fractures on bones that could only be inflicted by other large carnivorous beasts. Therefore, we can conclude that they either fought to the death by utilizing their powerful jaws, or that they were partially eaten by those of their own species.

T-Rex Capital of The World

There are many regions in which T-Rex remains have been uncovered, however, there is one unpredictable location in North America that is very much known for its elevated number of T-Rex skeletons. Buffalo, South Dakota is considered the Tyrannosaurus Capital of the world, following the discovery of seven full skeletal fossils in that area. It is where “Stan” the most intact and famous T-Rex fossil to date was found. It took years to uncover and over 30,000 hours to reconstruct Stan’s structure.

Tyrannosaurus Rex eggs can be compared to those of a large bird. Due to the resemblance of reptiles and birds associated with this and many other dinosaurs, the eggs’ appearance would be what you would expect.

As stated earlier, it is possible that younger T-Rexes had feathers or feather fuzz. Therefore, newly hatched T-Rexes most likely resembled turkeys with less feathering. This would be comparable in size as well as appearance. There is very little fossilized evidence to help us understand what a T-Rex looked like in infancy or childhood. This suggests that most made it to juvenile years or adulthood with a great survival rate, or the younger bones discovered have been mislabeled and assumed to be a smaller tyrannosaurid species.

The Tyrannosaurus Rex did not always go by that name. The T-Rex was originally named Manospondylus Gigas just over a decade before the word Tyrannosaurus came to be. In the late nineties, there was a debate amongst researchers as to whether the name should be changed back, but it was decided that the well-known Tyrannosaurus Rex label for this beast should remain unchanged. The Tyrannosaurus Rex name was derived from Greek and Latin words meaning “lizard,” “tyrant,” and “king,” which are actually quite fitting.

One of the most interesting things about paleontology and dinosaurs is that the discoveries are endless. Throughout the Earth is a whole other world of undiscovered bones and remains that will tell us more about the great creatures that roamed our planet before us.

There is much information that scientists can fill in when it comes to what you don’t know about the Tyrannosaurus Rex. However, there is still much to determine. Next time you engage in Hollywood cinema depicting these animals, consider the knowledge you’ve obtained on the inaccuracies and differences you should now understand. Continue your investigation through the exploration of Creative Beast Studio’s action figures and model resin kits to expand your understanding.