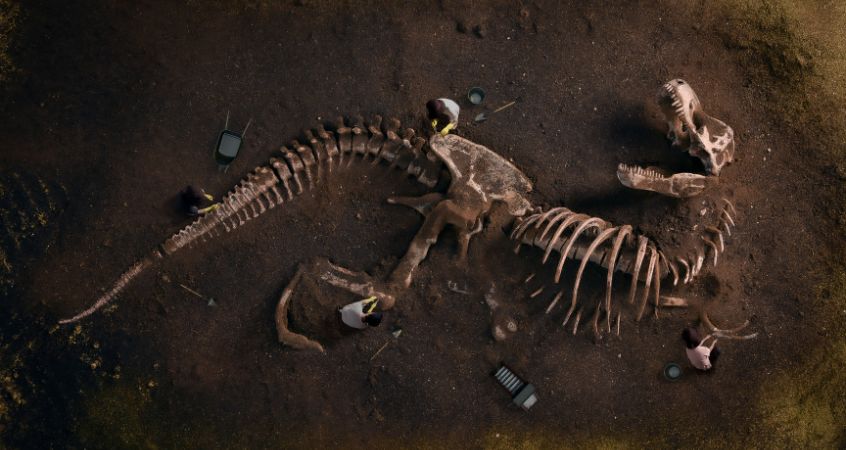 When we think about the lives of dinosaurs, we may struggle to grasp and understand the vastness of their lifeline. That is why it is helpful to know when dinosaurs lived according to the geologic timeline.

If you know a little about dinosaurs, then you likely know that they existed in what we call the Mesozoic Era. Beginning 252 million years ago, the Mesozoic Era, also known as the Age of Reptiles, is the second of three major geological eras. It helps to think of the Mesozoic Era as the time when dinosaurs lived according to the geologic timeline. This era comprises the Triassic, Jurassic, and Cretaceous periods of the Earth when dinosaurs reigned free.

The Triassic period is the first in the Mesozoic era, marking the beginning of significant changes during this iconic time. During the Triassic period, most of Earth’s land lay undisturbed, collected into the supercontinent we call Pangea, which created an overall warm and dry climate. You would expect to see a plethora of reptiles, as they flourished in the Triassic climate.

Tectonic plate activity picked up as the Triassic period drew to a close, inciting continental rifting. During this time, the first true mammals and earliest dinosaurs evolved. The Triassic finished with a bang as a mass extinction event took place, which would wipe out half of the marine invertebrates and many land animals, leaving behind mostly dinosaurs.

On the heels of a mass extinction, the Jurassic period succeeded the Triassic around 201 million years ago. During this period, vegetation grew flush in changing landscapes, allowing dinosaurs like sauropods to evolve. Many changes occurred during the Jurassic period, creating an atmosphere for many dinosaurs we are familiar with today to come into existence.

Do you want to see all the amazing beasts of the Mesozoic? At Creative Beast Studio, we have high-quality dinosaur figures with the most incredible details and accuracy.

Around 145 million years ago marks the Cretaceous Period. It was the final and longest era of the dinosaurs, lasting 79 million years. Dinosaurs reigned during this period, so you would expect to see the likes of the Tyrannosaurus, Triceratops, Elasmosaurus, and Mosasaurus traversing the Earth and its oceans.