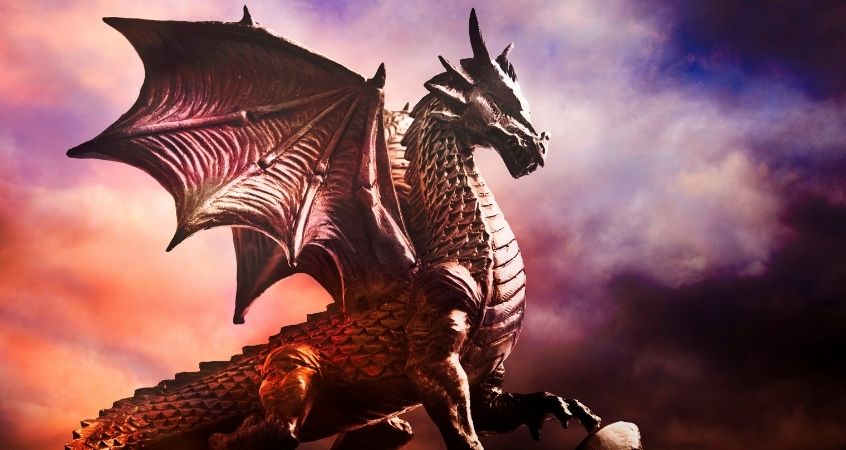 There’s no denying that dinosaurs are incredible, but if one creature had to come close on this scale of amazement, it would have to be dragons. These mythical winged beasts stem from cultures worldwide, and some look entirely different from others. The commonalities between dinosaurs and dragons are even more interesting, as much of the inspiration for these fire-breathing creatures stems from Mesozoic beasts. Take a deep dive into a brief history of dragons in mythology!

While dinosaurs themselves did not lead to the idea of dragons existing, fossils did. Many believe that when ancient civilizations unearthed various dinosaur bones, they assumed they belonged to large beasts. Unfortunately, while these fossils did come from a dangerous creature, it wasn’t of the fire-breathing variety.

It’s also quite possible that some dragon lore relates to societies discovering whale bones before truly understanding what creatures lived in the ocean. It’s quite likely that it came from several different creatures, hence the many types of dragons.

In some cultures, dragons hold a deep and vital meaning; while some are symbols of protection, others represent danger. Interestingly, dragons don’t breathe fire or even have wings in some beliefs! Their sizes and shapes are as diverse as the dinosaurs that once ruled our planet.

During the Renaissance, many across Europe imagined dragons were large beasts with wings, spiny tales, and of course, fire breathing. However, some thought dragons looked more like the Hydra in societies like ancient Greece.

While times have advanced quite a bit, and we have a deeper insight into what lived before us, many still believe in dragons. Whether or not they truly existed is up for debate. Most scholars argue that it’s far more likely that dinosaurs, deep-sea creatures, and flying reptiles like the pterodactyl were the real beast.

Many fantasy stories keep the myth of these creatures alive and well by creating mythical worlds where they rule. Although we’d love to believe this was once the case on our planet, most of what we’ve gathered from scientific advancements begs to differ.

If you loved reading this brief history of dragons in mythology and want to keep fueling that passion for beasts, then purchase a dragon model figure from Creative Beast Studio! Assemble an arctic dragon of your very own as you think about the fascinating relationship between these mythical creatures and the real deal—dinosaurs.