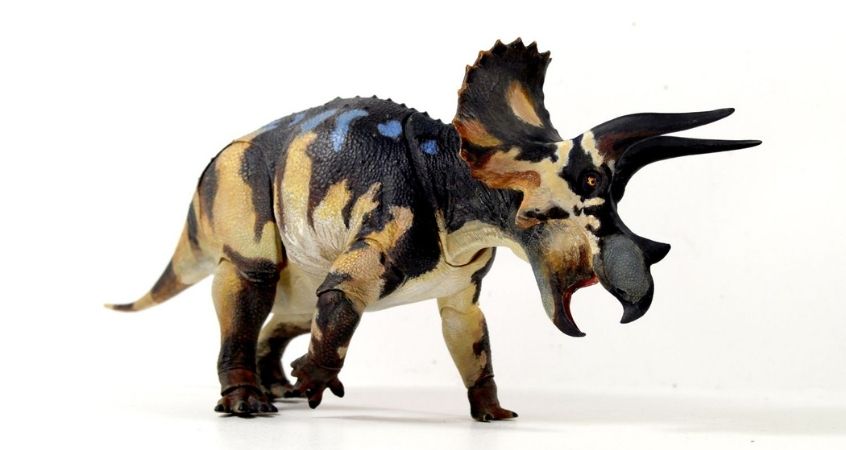 This guide to Ceratopsian dinosaurs will help you to understand these magnificent creatures. Though there was quite a variance of species within this group, many details encompass all species of Ceratopsidae. These horned animals were a prominent part of dinosaur history. Help to further your understanding of their defining characteristics and features by reading ahead.

Ceratopsidae, meaning “horned face family,” were not always huge. They started as a smaller dinosaur and evolved into a larger size over time. Some species were as small as chickens. These animals were mostly quadrupedal, meaning they walked on all four legs, distributing about 60 percent of their body weight to the front legs.

The majority of Ceratopsidae had very similar bodies. The differences between species appeared on the head. Their heads featured a rostral bone, which resembled an upper lip, but was hard and pointy at the end. The postorbital horns on their heads pointed toward the sky and stood in front of the frill.

This frill was the large, flat, and circular part of their heads resembling a shield or a crown. Located at the frill’s edge were bony extensions called frill epiossifications, which looked like bumps or dull spikes. Furthermore, Ceratopsian dinosaurs’ skulls featured a nasal horn located above the nostrils. Creative Beast Studio offers beasts of the Mesozoic figures if you want to further explore the physical characteristics of Ceratopsian dinosaurs. They carefully demonstrate key similarities and differences in features between distinct species.

Use of Skull Parts

Many people speculate as to the use of the skull parts associated with Ceratopsidae. Some paleontologists theorize that they used the horns to ward off predators. Ceratopsian dinosaurs and the Tyrannosaurus rex existed in the same time period, which indicates that their horns could have been useful for fighting.

Other theories suggest that though the horns may have been beneficial for defense purposes, they were more likely used for show. Like many animals that exist today, people believe that Ceratopsidae used their horns to attract mates. Others suggest that they were used to display dominance over rivals. Science indicates that, like other animals that we know, the frill regulated body temperature for Ceratopsian dinosaurs. All theories are valid, and they could all be true.

Many people believe that Ceratopsian dinosaurs existed at a time of great continental divides and merges that cannot be seen today. Scientists suggest that North America had a Bering Passageway dividing the continent down the middle. They also theorize that Asia and Europe may have been similarly split by a seaway, confining the first Ceratopsian dinosaurs to Asia alone.

Paleontologists once thought that this grouping of dinosaurs originated in Asia and suddenly vanished. They assumed they became extinct and later evolved and redeveloped in North America. After further discovery, they now believe that the continents of North America and Asia joined together. This allowed for the migration of these animals between continents. They didn’t vanish; they relocated.

Ceratopsian dinosaur fossils are the key to knowledge about these creatures. The migration and relocation theories are based on fossils that have been recovered over time. Some dinosaur bones found in Asia were of a species previously believed to live solely in North America. This further supported the claim that the two continents were formerly connected, allowing for travel back and forth.

Between the years 1887 and 1889, many horned fossils were discovered. Over time, paleontologists have slowly uncovered a great deal of information. In 2018, the number of different species of Ceratopsian dinosaurs that had been identified was at forty. More than half of those discoveries were made in the last ten years. Paleontologists have uncovered full sets of many Ceratopsian bones. This allows for a relatively accurate picture of what these animals looked like. With intact bone structures, research can produce a fairly clear image of Ceratopsidae.

With such well-built fossil structures, we can deduct specific information. These displays have allowed for the Triceratops to become one of the most popular and well-known dinosaurs. The Triceratops is wildly popular in pop culture, due to how familiar it is to us, with an immense amount of information available about this creature. The Triceratops can be seen featured in most dinosaur-based television shows and movies.

Using a guide to Ceratopsian dinosaurs, we can discover the existence of many animals like the Triceratops. We now know that this grouping of dinosaurs gave life to many species that existed all those years ago. Understanding the difference between them will lead to a better comprehension of these massive beasts of the Mesozoic era. The progression of the discovery of Ceratopsian dinosaurs is astounding. The difference between their size near the end of their evolution compared to their size when they first developed is magnificent.

Take some time and explore the figures of beasts of the Mesozoic era and draw your conclusions for reasons for their horns and frill. Form hypotheses about their potential coloring and their abilities to defend themselves against carnivorous predatory dinosaurs on the hunt. There is so much room to make deductions about Ceratopsian dinosaurs based on the information we have available to us.

With the multitude of discoveries made in the past decade, we will continue to learn more about Ceratopsian dinosaurs and other groups and species. Dinosaur theorists suspect that many undiscovered fossils exist in the badlands of the world’s continents. Time will tell, but in the interim, there are many ways to continue the study of these beasts. Embark on your journey into the world of history and paleontology. The opportunities for discoveries are endless!