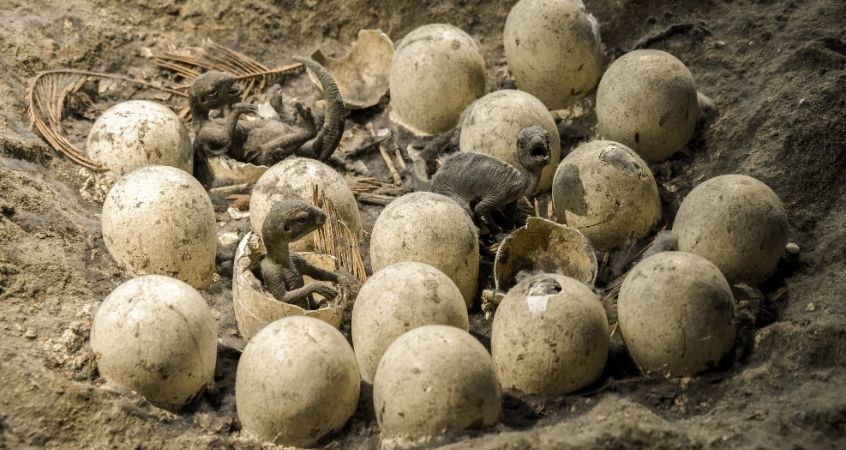 In a lot of ways, dinosaurs were related biologically and characteristically to birds and reptiles. As we continue to research their remains and form hypotheses about their behaviors and tendencies, we see even more of a correlation between them and our modern-day wildlife. Read this to understand more about dino parenting, how dinosaurs raised their young, and the similarities and differences.

Through research and the eggs discoverable by scientists, it’s believed that both land-dwelling and avian dinosaurs definitely laid eggs. All dinosaurs—unlike mammals who carry live young—are believed to have started with eggs, except for some marine reptiles.

Researchers have found evidence of tiny embryos fossilized inside the bodies of marine mothers. This suggests that at least most ichthyosaurs (dolphin-like marine reptile) birthed live young in the water instead of laying eggs on land.

There is little evidence about other marine reptiles to determine if birthing practices were similar or different. Some hatchlings came out needing care from a parent, while others came out “ready to run.” To increase survival rates, dinosaurs laid many sturdy eggs at once—so even if predators got some, they wouldn’t wipe out all the young.

Like modern-day birds, there is much speculation that feathered dinosaurs would’ve also built nests—but rather than in trees, like modern-day birds, these nest would be in the ground, covered by leaves and debris. Some dinosaurs were brooders and sat on their eggs in nests, protecting and incubating. Other species laid their eggs and left the nest, never to return. There were often dedicated nesting grounds where these nests were built and eggs laid.

Many dinosaurs produced a milk-like substance in their throats and stomachs to mix with regurgitated food which they would feed to their young, similar to birds. They most likely did not have nipples like mammals. Researchers believe that avian-like dinosaurs who stayed with their young used this technique to help feed them.

A way to evaluate dino parenting, how dinosaurs raised their young is to note whether they were carnivorous or herbivorous. While herbivores tended to roam and graze their young as they grew and move in herds, carnivorous dinosaurs may have been different.

Though many carnivorous dinosaurs ran in packs, they often hunted alone. Research suggests that many creatures’ diets changed as they grew because they ate what they could catch, rather than being fed. Many theropod dinosaurs hatched young who could walk immediately. They were ready to explore and find a way to survive. Some carnivorous dinosaurs may have taught hunting, but most seem to have been in a do-or-die situation.

To take a closer look at dinosaurs in their juvenile forms, Creative Beast Studio has been building a collection of various nestling action figures to help you gain a better visualization of these infantile forms of the other dinosaur figures for sale that we offer.