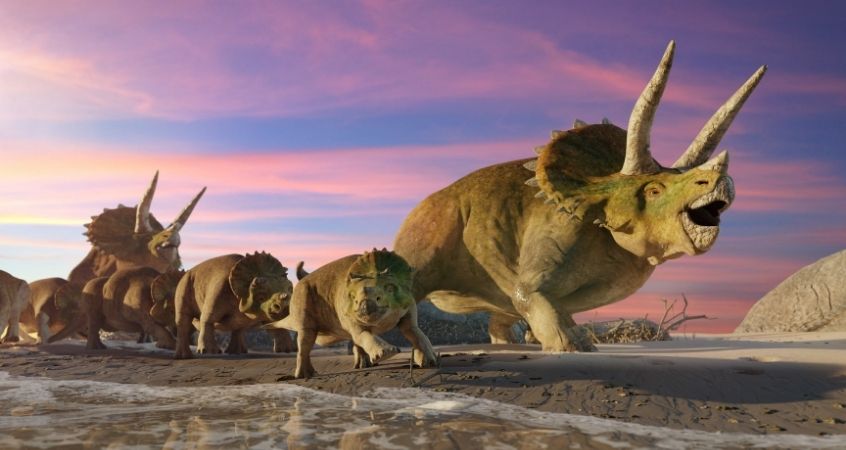 How did dinosaurs protect themselves when ferocious beasts like the T-Rex roamed the Earth? These and other large carnivores had sharp teeth and claws for tearing. Some predators, like the Velociraptor, were quick. Herbivores weren’t weak members of prey—they had protection. Some used their tails for protection or sharp claws. Others had spikes and even body armor! So read ahead if you’ve ever wondered, “how did dinosaurs fight?”

Carnivores weren’t the only ones with sharp claws—some plant-eaters also had them for defense. This would allow them to scratch their attacker so they could find a way to escape safely. Other dinosaurs, like the Triceratops, had horns that weren’t for show.

The Triceratops was a 4-legged dinosaur with spikes on its back. Scientists suspect that the horns above its eyes helped protect it from predators. In addition, these horns were around 3 feet long, so that they would have offered excellent protection!

There were many reasons Triceratops needed protection. One reason they may have developed horns is because of their short legs—they were slow-moving. Horns would protect them from any predator planning an attack!

This plant-eating dinosaur had quite a bit in common with an animal we see today—the rhinoceros! Like the mammal, these reptiles likely lived in herds. Additionally, one of their three horns was at the tip of their nose.

They lived during the Cretaceous period, which was near the end of the Mesozoic era. Many find fossils of this beast in Western North America.

Scientists aren’t positive on why they had these plates, but the spikes were for protection. They may have needed protection because of their tiny brains their and slow movement.

This dinosaur roamed the Earth in Southeast Africa during the Jurassic Period. Similar to the Triceratops and fellow Stegosaurians, it was likely a herding animal.

While some dinosaurs had horns, others developed body armor made up of bony plates and thick skin. This worked as excellent dinosaur protection. Scientists refer to this as osteoderms. In the modern age, we see this feature on armadillos, alligators, and some other animals. Despite razor-sharp teeth, these scales made it hard for predators to penetrate the skin.

The Ankylosaurus was an armored dinosaur that had thick skin and knobs all over its body. These knobs or oval plates protected it and formed with the skin. Each plate varied in size and ran down the body in horizontal rows. Some plates were smaller than others, but each helped protect the massive lizard. The Ankylosaurus fought off predators using clubbed tails that doubled as a weapon and shield.

They roamed the Earth during the Cretaceous Period in the Western United States and parts of Canada, and the largest was 20.5 feet long! Their armor was thick in the neck region, most likely for protection. In addition, they had spikes, horns, and a wide-set body, making them difficult prey.

Some dinosaurs were lucky enough that their size could help deter predators. Why? They were too big for a single carnivore to take down. So, unless the carnivore hunted in a pack or was massive itself, it likely avoided these dinosaurs.

Also known as the Brontosaurus, this was one of the largest animals ever to walk the Earth! These herbivores were massive, and their size helped protect them. Some suspect that it would even stomp at predators or swing its tail around.

The typical Apatosaurus was around 80feet long and 15feet tall. These dinosaurs lived in North America during the Jurassic Period.

Interestingly, the theory of them stomping their feet for defense has some backing since they had a pointed claw on each foot. They had long necks so they could get to hard-to-reach foliage.

While the Apatosaurus was one of the largest beasts, the Supersaurus is among the longest land animals. Despite their long necks, they likely had limited mobility. Why was their neck long? Like the Apatosaurus, its long neck helped it reach leaves high up in trees.

The first fossil of the Supersaurus was dug up in North America—western Colorado, to be exact. Unfortunately, however, this fossil is incomplete.

These dinosaurs moved slowly, likely due to their size. Also, like the Apatosaurus, it had a clawed nail that likely protected it. But how did this dinosaur fight? Scientists believe they used their tails as whips!

Dinosaurs defended themselves in various ways, including with their tails. While some had clubbed tails made of hard bones, others had spiked tails. Both made great personalized weapons when swung at predators!

The Stegosaurus used its tail for protection—they had flexible, spiked tails. Their tail had four spikes on it, which likely caused a good deal of damage to any hunter looking for a meal. Oe swing from their powerful tail and a predator would know to back off or face further damage.

These dinosaurs had body armor, but scientists debate whether that was enough to protect it. Instead, it was their tail combined with these spikes that likely kept it safe. They may have used the spikes along their back for further protection, as these boney plates lined their spine.

Herbivores weren’t defenseless beasts, and they protected themselves in various ways. After all, herbivores needed a line of defense against beasts with sharp claws and teeth. While some had horns and spikes, while others were completely covered in armor! The biggest dinosaurs used their size for protection.

Now that you’ve learned how dinosaurs fought off predators, do a dino-centric activity. Creative Beast Studio sells incredible dinosaur model kits. If you’re looking for a fun pastime or hands-on project, buy one and make it a fun new hobby. Then, you can paint it to look like the real thing!