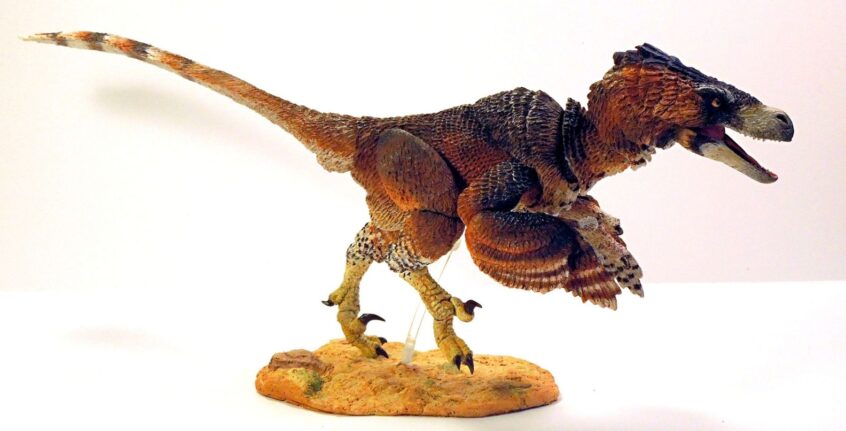 The Mesozoic Era—the age of dinosaurs. Understanding the beginning and the end of the dinosaurs’ reign can be explained with a brief history lesson.

Perhaps your child just learned a bit about prehistoric times in school. Maybe you want to understand what dinosaurs were actually like, rather than just relying on your knowledge from The Land Before Time, Power Rangers, or Jurassic Park. Whatever your reason, there is a lot to know about the age of dinosaurs. That’s what we’ll discuss below.

From the climate and the geographical aspects of the world all the way down to the plants and animals, the Mesozoic Era was very diverse. Yes, these are all factors that led to the creation and extinction of dinosaurs! Below, we will discuss everything you need to know about the Mesozoic Era. Let’s begin!

The Six Periods of the Paleozoic Era

The Paleozoic Era came before the Mesozoic. The Paleozoic Era was comprised of six periods. The Cambrian period introduced developing arthropods and invertebrate animals with an exoskeleton, such as insects, crustaceans, and more. The Ordovician kickstarted the development of straight-shelled mollusks, distant relatives of the octopus, or squid. During the Silurian period, plants and animals began to inhabit the land in addition to the water. The Devonian signified the introduction of fish. During the Carboniferous period, forestry started to take shape and cover the ground. And finally, the Permian period began the most massive extinction on Earth.

Climate and Continents for the Paleozoic Era

The climate during the Paleozoic Era was mild, with neither extremely hot nor extremely cold weather. For the most part, the continents were joined, except for what we now know as North America. This meeting of the lands created a supercontinent known as Gondwana.

Though the Paleozoic Era gave birth to many new species that have since evolved into creatures we still know today, there was animal and plant life even before the Cambrian period. The Paleozoic Era brought about the mass extinction of 95 percent of life on Earth. Apart from scientific speculation, it is still unclear what exactly caused the wipeout of almost every living thing on Earth. The lack of evidence available to fully understand what caused these plants and animals’ deaths continues to perplex scientists.

The Three Periods of the Mesozoic

As you now know, the Mesozoic Era followed the Paleozoic Era. It’s broken into three periods: the Triassic, Jurassic, and Cretaceous Periods. The Triassic Period started with much harsher climate conditions than had been experienced throughout the Paleozoic Era. Amphibian life began to evolve to withstand extreme temperature and moisture. Much of the life that survived the Permian Period of the Paleozoic Era was sea-dwelling. Reptiles took to the water to hunt, with very little competition for the top of the food chain.

The Jurassic Period gave way to the formation of countless new groups of species as the climate stabilized, and the Earth became more inhabitable. Though this was the time of the dinosaurs, other animals such as small mammals and birds continued to develop.

The Cretaceous Period continued during the time of the dinosaurs. Flowers started to bloom; before this time, plants and trees did not have buds that turned into flowers. The Cretaceous-Tertiary (K-T) event also occurred. In this event, a meteor hit near the Gulf of Mexico, causing 70 percent of living things to become extinct and causing the eruption of volcanoes. This sent ash into the sky, blocking the sun for years. As vegetation was affected, herbivores were as well, and so on up the food chain.

Climate and Continents for the Mesozoic Era

The Mesozoic Era brought lower sea levels, more exposed land than ever before, drier climates, and fewer marshlands, all of which began the creation of deserts. There were more seasonal differences in this era than the last and much more extreme temperature variations. Between the end of the Paleozoic Era and the Mesozoic Era’s start, the continent became more expansive. What we now call North America collided with the mass known as Europe and Asia. This supercontinent is referred to as Pangea and made up most of the land above the water on Earth. Between the Jurassic and

Reptiles developed thicker skin, not only on their bodies but also on their eggs so they could endure warmer, drier climates. These reptiles were called diapsids and were known to have two openings behind their eyes. Many of these diapsids evolved into dinosaurs that exhibited the same features. The dinosaur species started to evolve and moved into the Jurassic and the Cretaceous Periods, where they ruled the Earth without competition until the occurrence of another extinction.

This extinction wiped out dinosaurs and rain forests, though it is still unclear to researchers what exactly caused this devastation. There are theories that an asteroid was a significant factor in this round of extinction. Though the annihilation in this period was not nearly as destructive as the extinction in the Permian Period, it did destroy dinosaurs completely. However, rainforests returned, as did reptile life that has since evolved into present-day animal species.

Dinosaurs in the Jurassic & Cretaceous Periods

The T-rex is the most famous dinosaur, as it is known for its violent nature and terrifying appearance. It existed at the end of the Cretaceous Period. Though the Tyrannosaurus Rex was not the largest of the dinosaurs, it lived as one of the most dangerous with its huge teeth and carnivorous thirst to kill and eat whatever it could.

The T-rex is believed to have had excellent vision and a keen sense of smell for hunting. Though they had extremely short arms with two long claws, their hind legs were very powerful, as were their massive jaws. There are many contradicting theories on whether the T-rex actually had the ability to chase down prey, being that it was so large.

Believed to be larger than the T-rex in recent research, the Giganotosaurus was a large meat-eating dinosaur that was very similar to the Tyrannosaurus. It populated the area of the world we now know as South America. This dinosaur is described as a giant southern lizard and, like the T-rex, stood upright and tall with a long, pointed, and powerful tail. Without a doubt, the Giganotosaurus killed live prey. This carnivorous beast fed mainly on large herbivorous dinosaurs and had no natural predators, making it the top of the food chain.

This is another incredibly recognizable and popular dinosaur. Often compared to the antlers of a goat or deer, the triceratops was armed with three horns to protect itself against predators. Two horns were set above its eyes in front of a shield-like faceplate. Some believe this regulated the beast’s temperature. The third horn by its nose was perhaps the first defense in warding off attacks.

The Mesozoic Era was undoubtedly a defining time in history. The surge of plant and animal life that led to dinosaurs’ existence is a whirlwind of exciting and startling information. For two-thirds of this era (and for millions of years before humankind existed), these great creatures walked the Earth without being disturbed. Suddenly, they were wiped out with no definitive reasoning for such an event. For a better physical representation of the body types of the dinosaurs listed abode, turn to Creative Beast Studio for realistic dinosaur figures. There is a lot to be learned about the Mesozoic Era to truly understand the beginning and the end of dinosaurs and the life progression of the plant and animal species that exist today.