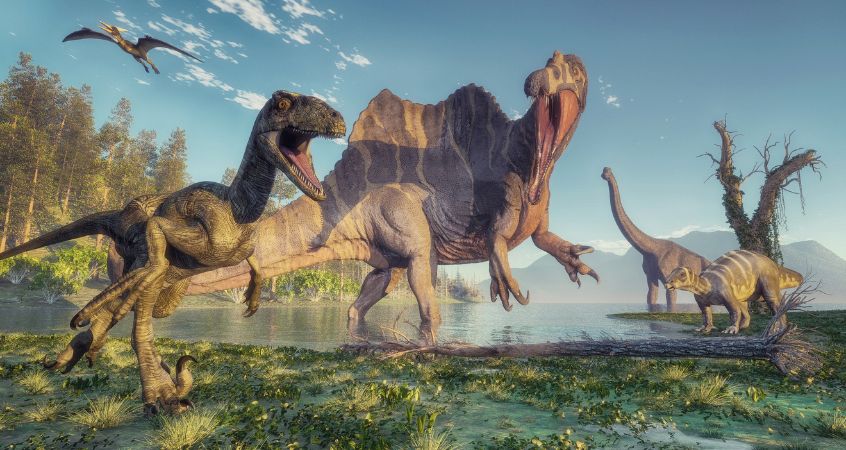 It might be surprising to discover that not all dinosaurs existed simultaneously or in the same climate. It’s not surprising after considering the fact that dinosaurs traversed the earth for about 165 million years. Many different kinds of dinosaurs needed specific environments in order to survive. Keep reading for our guide to the different dinosaur habitats.

These coastal floodplains were rich with dense forests, many flowers, and fibrous plants. The swamp lands were perfect for many creatures, including the Anatotitan, a duck-billed dinosaur, also referred to as “the cows of the Cretaceous.” These dinosaurs traveled in herds, scavenging for vast areas of land filled with nutritionally dense plants to feast on. Unfortunately, these cows of the Cretaceous also had to be on the lookout for the swift-moving Theropods who were ready to sink their three-toed claws into them.

During the Cretaceous period, the third and final era of the Mesozoic age, the land we know as the plains grew vast swaths of prehistoric plants and ferns. Due to the many plants available, herbivorous dinosaurs spanned the land, making use of their surroundings and fueling up on greens. These herbivores include the Hadrosaurus and Ornithopods, among others. However, carnivorous raptors were always lurking, ready to make one of these unsuspecting dinos their next meal.

Do you want to learn more about the beasts of the Mesozoic and get a first-hand glance at how these creatures looked? Shop with us at Creative Beast Studio. We have many dinosaur figurines that existed during the three iconic epochs of the Mesozoic era.

When we think of the poles, we imagine the icy and freezing regions we wouldn’t want to find ourselves in. It can be hard to imagine dinosaurs surviving in these climates, but that is why this guide to the different dinosaur habitats exists. In the Mesozoic era, the polar regions were much less cold than today. Still, these areas endured long periods of darkness for weeks and months at a time.

As such, we would see dinosaurs like the Leaellynasaura in these areas. Some paleontologists believe their large eyes enabled them to take in more light and see in the dark during extended periods of darkness.