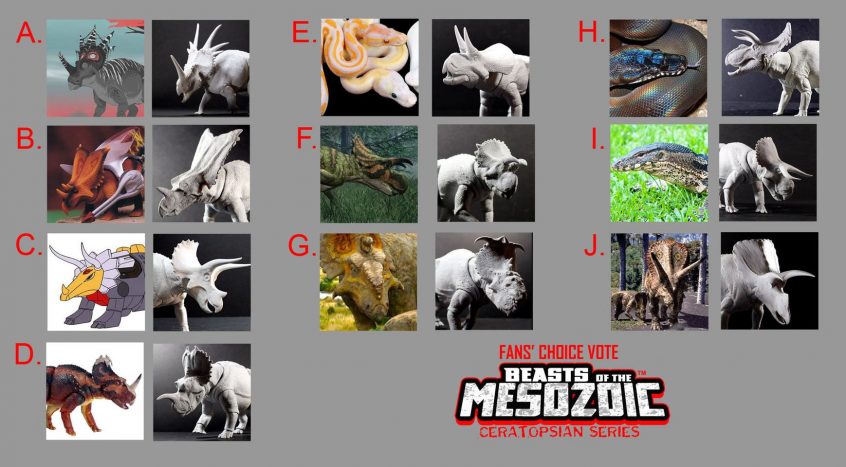 Today we begin voting on the Beasts of the Mesozoic Fans’ Choice Ceratopsians! I’ve compiled my list of the top ten options based mainly on popular requests but also on strength of concept. Keep in mind that for any of these ideas, they’ll serve as inspiration for the final version, but aren’t meant to be direct copies from the original source whether it’s from pop culture or nature. The winning figure ideas will all be designed to fit in with the existing BotM line. The choices are as follows in no particular order:
A. Styracosaurus – ‘Old Buck’ by David James Armsby
B. Chasmosaurus- ‘Dino Riders’ toy
C. sub-adult Triceratops- ‘G1 Dinobot Slag’ cartoon/ toy
D. adult Centrosaurus- BotM juvenile Centrosaurus
E. Zuniceratops- albino python
F. Avaceratops- ‘The Isle’
G. Pachyrhinosaurus- ‘Walking With Dinosaurs’ movie, Scowler
H. Medusaceratops- iridescent rainbow snake
I. Nasutoceratops- Asian water monitor
J. Torosaurus- ‘Walking with Dinosaurs’ documentary
Please list your top four choices in the comments- I’ll announce the winners next Monday.
Honorable mentions:
adult Triceratops- Prehistoric Park or Saurian
Both suggestions were very popular, however this figure was omitted due to already having a repaint planned (green ‘Bionotops’ homage). Having three versions of a high-cost item would likely be too many to offer at one time.
Protoceratops- ‘Bix’ from Dinotopia
Omitted due to there being two more releases of this body already planned. I also don’t feel that this would translate well for BotM.
Styracosaurus- ‘Dino Riders’ toy
A similar color scheme is already planned for release in the Cyberzoic line.

Thank you to all who’ve participated with the suggestions- now it’s time to vote!