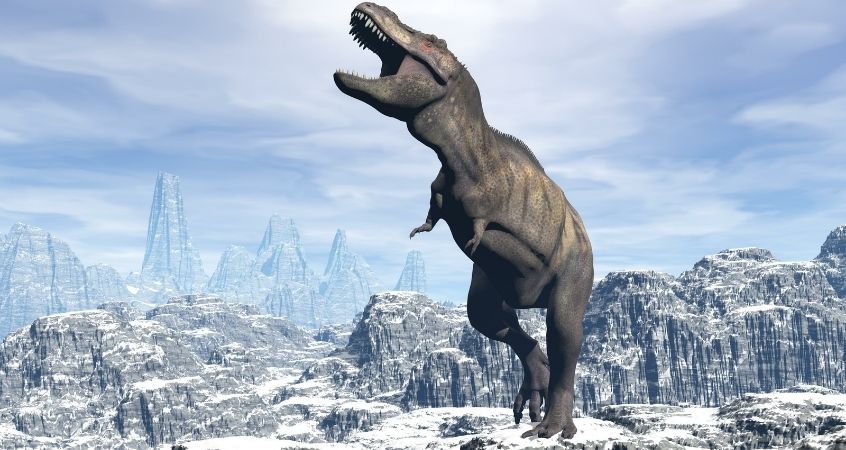 Most assume dinosaurs lived in hot climates surrounded by lush rainforests. But this wasn’t always the case because the dinosaurs lived in many different areas. There were even polar dinos—dinosaurs that lived in the Arctic! While the polar region was warmer than it is today, temperatures were still freezing.

How Did They Survive?

Scientists aren’t certain how these dinosaurs did it, but they managed to adapt to the cold climate. Experts theorize that they could regulate their body temperature, unlike their cold-blooded relatives. Scientists think this because of the lack of lizards, turtles, and crocodiles in freezing regions.

But What Did They Eat?

Remember, the Arctic was warmer than it is today. So, they likely feasted on vegetation. But during the winter, finding a meal would have been a challenge. They may have migrated to avoid this. Of course, some theorize dinosaurs ate bark, ferns, and aquatic vegetation when they were living in wintry settings.

What Was an Arctic Dino?

You’re probably curious to know more about a specific example of these Arctic dinos. Some of these Arctic beasts included Dromaeosaurus albertensis, Pachyrhinosaurus lakustai, and Stenonychosaurus inequalis. If you’re looking for awesome, accurate figurines of these dinosaurs, you can buy all three of these at Creative Beast Studio!

Another one of the dinosaurs that lived in the Arctic was the Ugrunaaluk. This beast lived in latitudes above the Arctic Circle, unlike many other animals. They were massive plant-eaters and measured around 10 meters long!

Scientists say the Ugrunnaaluk had crests along its back and at least 1,000 teeth. Since the Ugrunaaluk were herbivores, all these teeth worked to crush plants.

The species belongs to the hadrosaur group. Dinosaurs in this group were “duck-billed.” Another interesting feature of this reptile was the appearance of its front legs. They were shorter than its back legs, yet the Ugrunaaluk walked on all fours.

All dinosaurs weren’t the tropical beasts you may have assumed they were, and some flourished above the Arctic Circle! Other noteworthy Arctic beasts were the Cryolophosaurus, Nanuqsaurus, Leaellynasaura, and Muttaburrasaurus. Remember, the Earth was warmer when these Mesozoic creatures ruled, but living above the Arctic Circle was still no easy task. They faced snow and winters of complete darkness.

Shop at Creative Beast Studio to continue growing your love and knowledge for dinosaurs! We sell dinosaur resin kits, high-quality dinosaur figures, and more for all ages. Discover the beasts that once ruled the land we live on and share in the excitement!