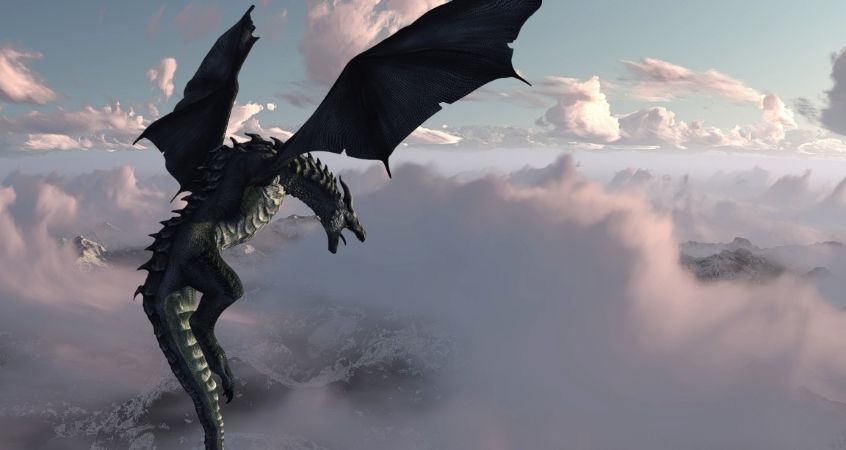 Dragons and dinosaurs look so similar that a hopeful fantasy fan might wonder if they’re connected. There is no hard evidence to tell us whether dragons once walked (flew?) over the Earth. However, there are a huge amount of tales and folklore describing these mythical beasts from every culture in the world. It’s speculated that the root of these stories hinges from a concoction of bedtime stories meant for warning and references of actual dinosaurs based on fossils found. But are dragons and dinosaurs related? In looking deeper, you’ll see that the connection between dragons and dinosaurs is pretty strong.

The idea of the dragon is most likely inspired by ancient civilizations’ discoveries of giant fossils. The bones of creatures never before seen any man can quickly take on a life of their own through speculation and storytelling. Additionally, many mammalian creatures that existed in prehistoric times— or leading up until the time of humans—were much larger than they are today. Remains from beasts such as those may spark a bit of imagination as well, leading past and present people to wonder if these winged and fire-breathing beasts existed. It begs the question: Are dragons a type of dinosaur.

This isn’t only hopeful musings: there is a long history of identifying dinosaur bones as dragons’ in ancient China. The similarities between these creatures were their size and apparent relation or resemblance to reptilian creatures. Many dragons in theory are described as scaly and serpentine in appearance. Though paleontologists have playfully pointed to dragons when giving new discoveries of dino-species names, they still have yet to find a full-on fire-breathing, winged, four-legged “dragon”.

So what are the differences that separate dragons and dinosaurs? In evaluating the differences between what would be deemed a dragon versus many beasts of the Mesozoic Era, it’s important to look at some of the characteristics of many dinosaurs. As research continues, there are more and more connections between birds and dinosaurs than ever before. It was once believed that dinosaurs were giant reptilian monsters, but that isn’t necessarily accurate. Additionally, between cultures the physical features of the dragon differ greatly. Some look more like giant snakes while others bear the head of a lion or other big cat.

There’s so much out there still undiscovered. The main connection between dragons and dinosaurs may be that they existed (or may have) long ago and that we still know so little, even when we know a lot. Creative Beast Studio takes pride in evaluating the noted features of different dinosaurs as well as information on dragons to create realistic and detailed dinosaur and fantasy dragon model kits. To be able to establish our own connections between dragons and dinosaurs is part of the learning process.