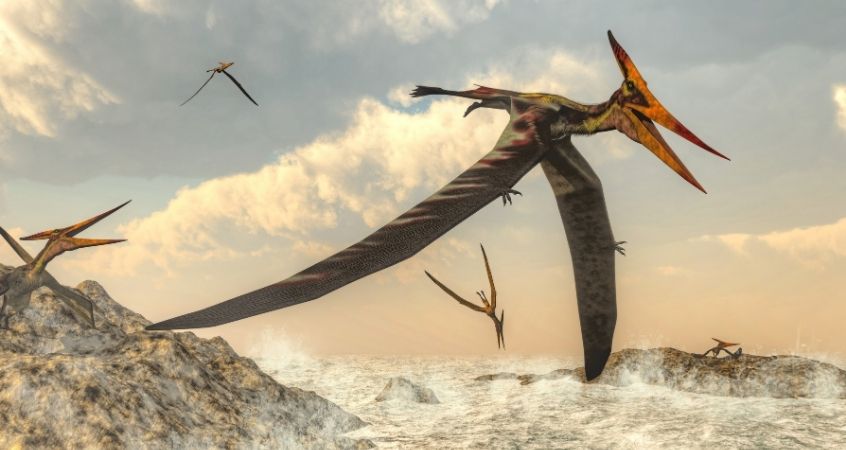 As you learn about various dinosaurs that existed in prehistoric times, you may discover many that you did not know about previously. The more information we find out about dinosaurs, the more terrifying they can be to imagine. By definition, dinosaurs were land-dwelling, non-sprawling reptiles, so who were the beasts that flew overhead?

We know many dinosaurs have a direct connection to birds now, but if they were reptiles then, evolution has given us a lot to unpack. To explore the different dinosaur-like creatures we know could fly, you’ll need to stretch your thinking.

For any kid growing up in the 90s and watching Power Rangers, Pterodactyl was a household name. The Pterodactyl is one of the most infamous flying “dinosaurs” to have existed; and it turns out that it wasn’t even a dinosaur at all. These beasts were giant flying reptiles. They were the first identified flying reptile of the Pterosaur species.

Pteranodon had a wingspan of about 23 feet. Belonging to the genus of Pterosaurs, these creatures were one of the largest flying reptiles to ever exist. Characteristics of this beast include a very short tail and no teeth. Many experts believe this animal existed alongside dinosaurs, but even with similarities in appearance, it cannot be classified it as one.

Dimorphodon existed in the early Jurassic Period and was officially named in 1859. With a wingspan just under five feet, this beast was not as large as other creatures in the air, but certainly held its own. Dimorphodon was another flying reptile that resembled dinosaurs. The difference between them was in their stance. While dinosaurs are categorized by their ability to stand upright, these creatures likely had a semi-upright stance.

Quetzalcoatlus was one of the largest flying beasts that ever lived. With a wingspan in the 30-foot range, this Pterosaur lived during the late Cretaceous period. Another toothless animal, this monster is characterized not only by its great size but also its unusually long neck. You may have guessed that these were reptiles too.

In the exploration of the different dinosaur-like creatures we know could fly, you now know that actual dinosaurs did not fly. Reptiles have clearly evolved a lot throughout time. As shown in a variety of Creative Beast Studio’s high-quality dinosaur figures, all dinosaurs remained on land. The reptilian connections of both dinosaurs and these flying beasts is very interesting. Researchers continue to search for the reason that some creatures developed wings and the meaning of different sizes and placements of feathers on popular beasts of the Mesozoic Era. Deciphering their features helps to categorize them for a more comprehensive understanding.