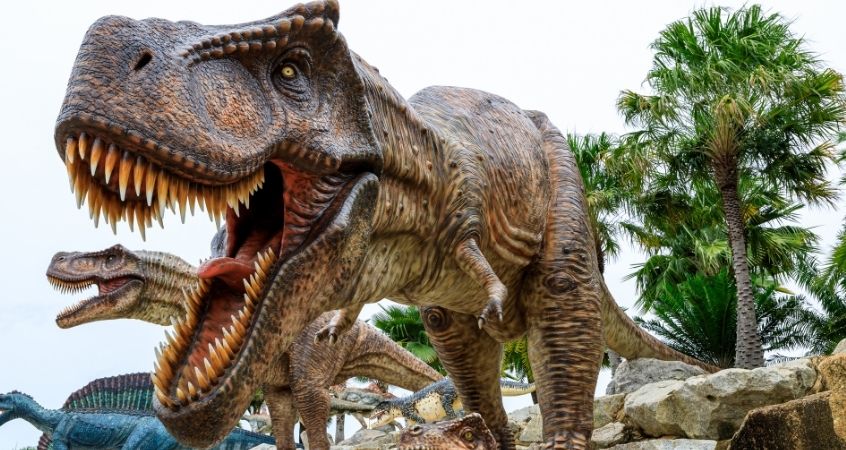 People associate the Mesozoic Era with mass-extinction events and the point when the great supercontinent Pangaea began to break up. But if this 186-million-year chunk of Earth’s history is best-known for one thing, it’s for being the Age of the Dinosaurs. To date, scientists have discovered hundreds of species of dinosaurs and predict there are hundreds more. But knowing just a few of the different dinosaurs of the Mesozoic Era will give us a better appreciation of this time period.

The first part of the Mesozoic Era was the Triassic Era, which spanned from 252 to 201 million years ago. Following the biggest mass extinction event in history, it took some time for life to recover on Earth, but as it did, the world got to see some of the first dinosaurs.

Before 2012, scientists believed that the first dinosaur emerged around 231 million years ago. However, after reviewing a previously unpublished study from the 1930s, that number is being pushed back by 10 to 15 million years. This study was about Nyasasaurus parringtoni, a long-necked, possibly bipedal reptile.

Technically, scientists still aren’t sure if Nyasasaurus was a true dinosaur. Its vertebrae and humerus were certainly dinosaur like. But its incomplete remains make drawing a conclusion difficult. However, even if it isn’t a true dinosaur, it’s certainly a close relative, which has changed our view of dinosaurs’ lineage.

After another mass extinction event came the Jurassic Era, a time stretching from 201 to 145 million years ago. It was characterized by shifting landforms and a warm, humid climate—perfect for dinosaurs.

People often think of the Tyrannosaurs rex when they think of this era because of the popular Jurassic Park movies. But the T. rex didn’t hit the scene until the late Cretaceous era. The real top predator of the time was the ferocious allosaurus. Allosauruses were smaller than the T. rex, but they still clocked in with a length of 35 feet and a weight of two tons. This smaller size made allosauruses agile ambush-hunters. Their bite force was only 3,572.56 Newtons—less than that of a modern lion. However, their perforated teeth were able to rip through flesh easily.

From 145 to 66 million years ago was the Cretaceous Period, which ended with the mass extinction event that wiped dinosaurs from the face of the Earth. It was the time of some of the more popular types of dinosaurs from the Mesozoic era, such as T. rex, duck-billed dinosaurs, and triceratops.

The term “raptor” refers to a small to medium bird-like dinosaur with three-fingered hands, an extended claw on its toe, and a feathered body. The first raptors appeared in the late Jurassic Era, but their numbers flourished throughout the Cretaceous Period. Raptors such as Pyroraptor, Atrociraptor, and the famous velociraptor were solo hunters, using their speed to isolate their victims and their claws to snatch them and pin them down. These raptors and more are featured in our collection of beasts of the Mesozoic figures.