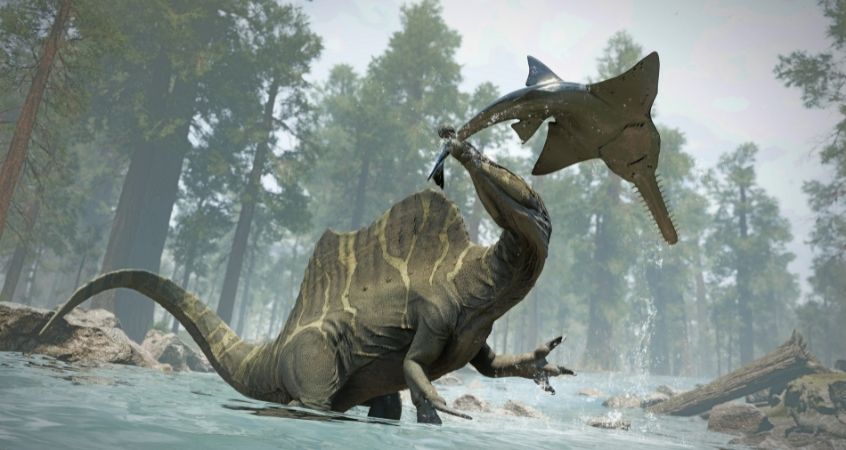 As much as we love to call all the beasts of the Mesozoic Era dinosaurs, they weren’t. Dinosaurs were land dwellers, and the first swimmer could dive into water that lived on land! Unlike this beast, the creatures of the sea belong to the Ichthyosaurs group. Learn more about the first swimmers who lived on land and explore the first dinosaurs in the water.

Who Was the Swimmer?

There can only be one: the first dinosaur that swam in the water was the Spinosaurus. The Spinosaurus lived during the Cretaceous period and could go for a dip in the water. They were the true dinosaurs in the water since they were, in fact, dinosaurs, and not Ichthyosaurs. All swimming dinosaurs didn’t necessarily have to live on land, however. Let’s not forget the Megalodon, a powerful dinosaur who lived in the water.

Scientists suspect it had webbed feet and survived on land and in water like crocodiles! These beasts had sharp rows of teeth since they were carnivorous. It’s theorized they hunted for food in the water, sometimes eating fish.

Keep in mind—this dinosaur was one of the first swimmers, but it didn’t live in water. The Spinosaurus was semiaquatic, meaning it spent time on land and in the sea. It could hunt underwater, but that wasn’t the place it called home. Another interesting fact scientists discovered is that their bones allowed for buoyancy control.

While we think of the T-Rex as the largest and most ferocious, the Spinosaurus was bigger. This strange beast was around 50-feet-long, making it one of the largest of its time! Interestingly, its lifestyle and looks were like the crocodile since they had conical teeth and an elongated snout.

One key feature of this swimming dino was the spines that grew on its back. Unfortunately, as much as we’d love to know the purpose of this interesting feature, scientists aren’t positive. However, they suspect it may have been for temperature control.

What About Their Tail?

Tails were an important feature to the dinosaur. Some used it for protection, and others for stability. And for dinosaurs in the water, the tail was used the same way we use flippers when swimming or diving. The Spinosaurus had a paddle-shaped tail which it likely used to propel through the water.

Where Did They Live?

When dinosaurs ruled, Earth looked quite different than it does today. Most skeletons of this Mesozoic Era are found in North Africa.

When we talk about the dinosaurs in the water, we don’t always mean those in the Ichthyosaurs group. The unique Spinosaurus could swim and live on land. These massive reptiles even outweighed the T-Rex! If you’re shopping for accurate dinosaur figurines, Creative Beast Studio has dinosaur figures for sale! Start showing off your knowledge of the beasts that once ruled the Earth.