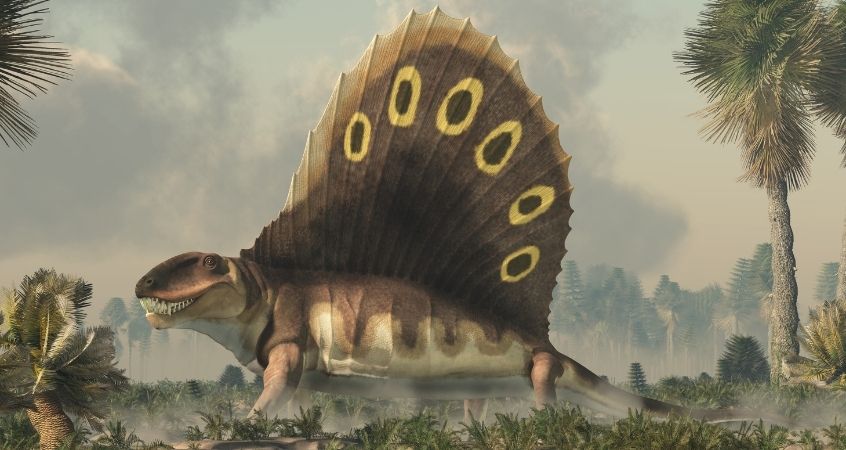 Though the end of the Permian Period brought about the biggest mass extinction on Earth, it also fostered animals like the Dimetrodon. This creature was a reptile-like mammal with a large sail on its back. Before the animals died off, they began to adapt and change into what seemed to be a result of the hotter, dryer climate conditions. These changes support the explanation of why the Dimetrodon had a sail on its back.

Closely resembling a dinosaur at first glance, a Dimetrodon was not a dinosaur, as dinosaurs didn’t exist yet. Synapsids are identified as having temporal fenestra, meaning two holes in the skull behind the eye sockets. This is a distinguishing feature of a mammal or an animal related to a mammal.

The Dimetrodon, if defined by its characteristics, was a reptile-mammal hybrid. These are referred to as pelycosaurs. Though these animals could adjust and live in various climate types like a reptile, their skull structures resembled that of a mammal’s. Even with many mammal-like features, Dimetrodons are not considered to be direct ancestors of mammals.

Dimetrodons are classified as more of a mammal but had sails on their backs like some reptiles existing today. Many theories of the purpose of this beast’s sail have been proposed. The sail was most likely used to regulate temperature as the evolution process was finding new ways to help animals survive in a range of temperatures. The base of the spine may have contained a lot of blood vessels, and the sail could therefore absorb heat from the sun in the morning and be used to maintain cooling features during the rest of the day when it was hotter.

Understanding why the Dimetrodon had a sail on its back helps to define the evolution and physical makeup of not only several dinosaurs that came after, but also of animals that currently exist. Having the sail to help keep a stable body temperature is still useful in the current array of climates on Earth, which are changing every day. It can be hard to wrap your head around these prehistoric creatures’ existence and their physical features, but they paved the way for many animals that followed.

Creative Beast Studio offers T-shirts illustrating the skeletal formation of the Dimetrodon, as well as a dinosaur model kit to assist you in understanding the physical characteristics of this animal. These products also allow you to create your own hypotheses and draw conclusions about the use of the back sail and how it relates to animals that exist today.