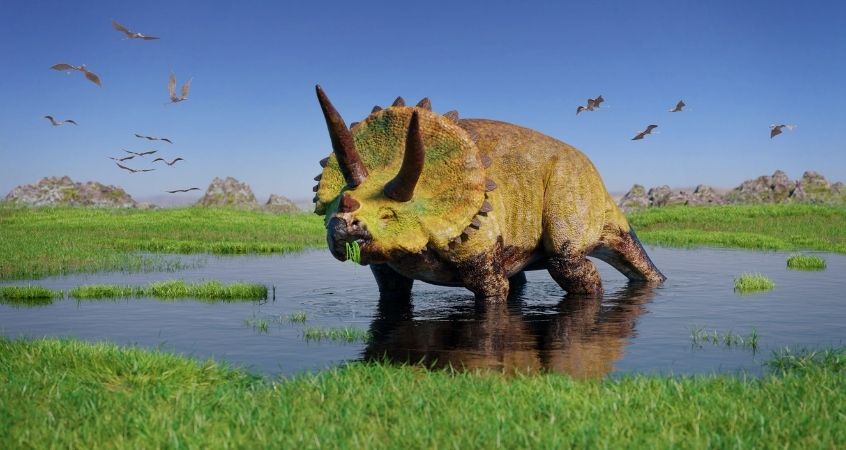 Though the Triceratops is a very well-known dinosaur, people don’t realize this beast is one of at least 40 different ceratopsian species. These reptiles have several characteristics that make for some very fascinating facts about Triceratops.

The Triceratops is one of the most-discovered dinosaur fossils. Due to how many examples we have to refer to bone structure, size, and even lifestyle based on their remains, we have a better understanding of these creatures than of many others.

The Triceratops has numerous notable features:

The Triceratops is most identifiable by its head. In Greek, its name means “three-horned face.” This beast had a large head with a nasal horn located above its nostrils. It also had two horns above its eyes, most likely used to fight off predators. Its head had shield-like crowns at the top with a bony edge called a frill epiossification.

Triceratops dinosaurs were herbivores. You could compare them to elephants. They were herding creatures that wandered the plains and fed on plant life. Though they were large and powerful creatures, they only chomped down on attackers that tried to make them prey. Turn to Creative Beast Studio to obtain Triceratops and other ceratopsian dinosaur figures for sale to further explore their features and draw conclusions of your own.

The Triceratops is one of the largest land-roaming creatures ever discovered. It was so big that some fossils have found with as many as 800 teeth in the beast’s skull. Due to their immense size and nature, these dinosaurs are not believed to have been very fast. Their rows of teeth and strong, large jaws allowed them to eat large vegetation such as small trees with no problem.

There are so many fascinating facts about Triceratops that it’s hard to list them all. Do your own paleontological research and see what else you can find out about these great beasts. Consider how incredibly interesting it is to picture a dinosaur as huge as an elephant wandering by and grazing in a field!