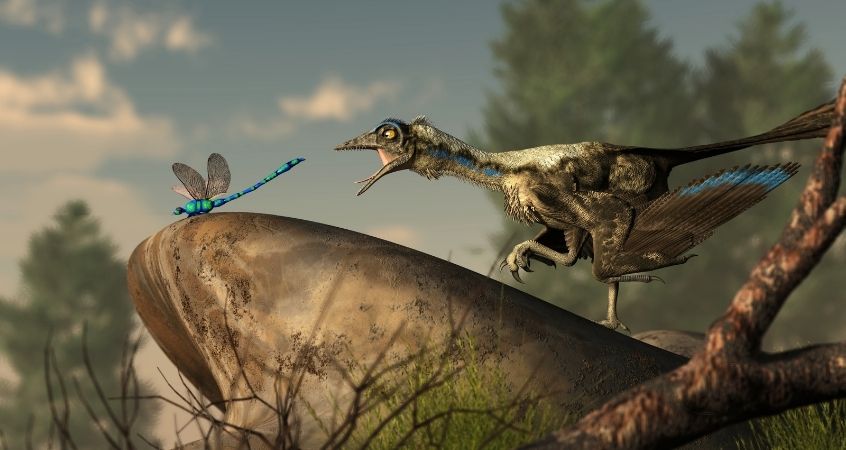 In dinosaur films, there are a lot of misrepresented beasts of the Mesozoic Era. Part of this is failure to adequately research each creature and part is that we are constantly learning new things. Continuous dinosaur research has helped to clarify information regarding a variety of dinosaur species and the features and characteristics that separate them from others. Many findings have described in detail how dinosaurs were similar to birds.

We were always aware of some of the similarities between birds and dinosaurs, while others we are beginning to see more clearly. In considering how familiar they were, exploring their parallels will add a whole new level of complexity.

As it stands, currently, it is believed that all dinosaurs laid eggs to reproduce. Very few dinosaur embryos have been discovered intact in eggs, so it is difficult to determine which species or dinosaurs laid the ones that have been found and studied. All bird species lay eggs as well.

Most people probably don’t realize that birds have scales. There are two major integument appendages to be aware of in birds. Typically, the scales are on the feet and legs to protect them and prevent loss of water. The avian reticulate scales closely resemble the reptile tuberculate scales in shape. Scientists say that the tissues used to produce reptiles’ scales are similar to the tissues birds use to produce feathers.

In recent years, one of the most surprising developments in studying dinosaurs was that many dinosaurs had feathers. Evident by the quill knobs etched into their fossils, feathers were noted as a characteristic of numerous dinosaur species for the first time in the 1990s.

Like birds, there are several dinosaurs known for having beaks, such as the Triceratops and Stegosaurus. There were other more obscure beasts such as the duck-billed Hadrosaur or the dome-headed Pachycephalosaur whose fossils show bony bases of the beaks.

Like birds, depending on the species some dinosaurs were herbivorous and fed on plant life and vegetation, whereas others were carnivorous and hunted prey such as a hawk or an eagle. Many predator dinosaurs had vision that wasn’t as good as a bird of prey’s, yet quite comparable in terms of hunting ability.

Both birds and dinosaurs are closely related to reptiles. Not only do they share many of the features previously mentioned, but some reptiles existed during the time of the dinosaurs that still exist today. The crocodile is a current yet prehistoric creature that has shared many similarities with both dinosaurs and birds and has stepped a foot in each world.

Both came from archosaurs making crocodiles the most closely related beast to birds. However, the birds are the direct descendants of the dinosaurs. They are believed to have evolved from the group called theropods.

Theropods were a group of hollow-boned creatures with similar features that ranged through multiple species. These dinosaurs had many features that we would today consider to be birdlike.

Theropods had three-toed limbs that can be seen still in many different types of birds. Some of the most famous theropods were the Tyrannosaurus Rex, Gigantosaurus, Velociraptor. The list of these creatures is worth exploring further, and for a physical representation of some of these dinosaurs, you can turn to Creative Beast Studio to evaluate dinosaur figures created with great detail.

In many theropods, there was a sickle-shaped or very deadly claw present on these three-toed limbs. Predatory species would utilize this claw to catch, disembowel, and shred the flesh of their prey, just as birds of prey do today. The difference is that today’s birds swoop in and fly away with their prey clutched tightly in their grasp. Obviously, the more herbivorous variety of birds lacks these claws.

In thinking about dinosaurs having four limbs, two of them hind while the upper two seemed to be held as a kangaroo holds its claws. Whether they fly or not, birds may have wings, but those are still limbs—they’re just limbs of an evolved species. Their two hind limbs are still used for walking, running, and anchoring to the ground.

The Archaeopteryx lithographica fossil was the first evidence scientist had linking birds and dinosaurs. Like modern birds, it had feathers, yet its skeleton resembled that of a small non-avian dinosaur. Because birds didn’t exist in the time of the dinosaurs as they do now, the most bird-like bird that was discovered from the Jurassic Period should be noted. The Alcmonavis poeschli is the avialan dinosaurs’ basal genus.

By now, we’ve deduced that there are numerous similarities between birds today and dinosaurs in the time before. There are many birds that show close resemblances to various dinosaurs. Research says that the chicken is the most closely related bird to dinosaurs.

Though flamingos and doves may not look like it, they are also closely related to dinosaurs, much more than you may think. The Velociraptor can be closely compared in size and stance to that of a turkey. To explore further, take a look at the velociraptor models and decide for yourself if these were simply giant, fearsome turkeys!

In exploring how dinosaurs were similar to birds, you may find yourself giving birds that side-eye they always seem to be giving us. To think that they evolved from the dinosaurs we read about. As you continue to learn of the similarities between dinosaurs and birds, as well as the inaccuracies with other dinosaur species, you may find yourself a much larger movie critic when it comes to this particular genre.

There is a lot of information out there, and even the information we have evolves into whole new discoveries. Creative Beast Studio understands that for the amount of media available regarding beasts of the Mesozoic Era, a lot of it needs to be set straight. Our way of doing so is to continue to create figures and prototypes that properly depict what paleontologists and researchers can tell us about various discoveries that are continuously being uncovered all over the world.

As with any part of science, y

ou need to take your own observations and draw your own hypotheses and conclusions. Being able to get an up-close view of some of these beasts, even on a smaller scale, may help to shed some light on dinosaurs in general. We may not have lived with them, but we may be surrounded by many similar creatures without even realizing it.