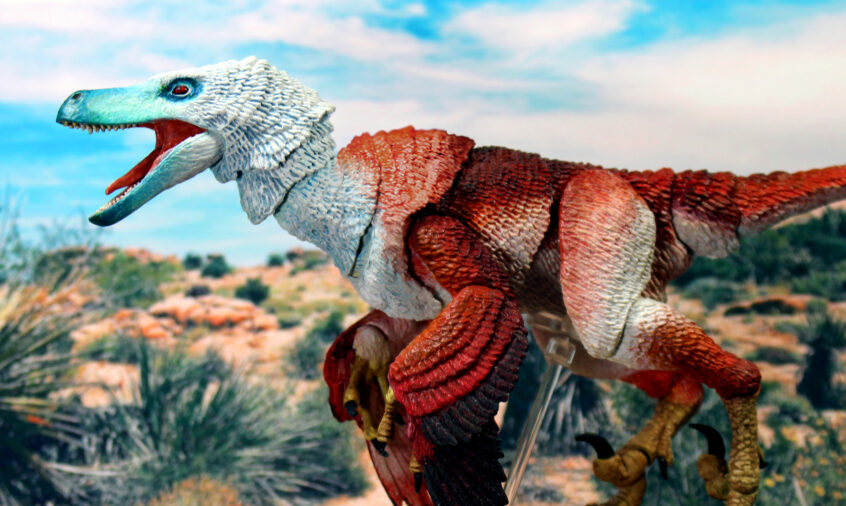 Are you craving some dino-fast facts on the mighty Velociraptor? This beast lived during the Cretaceous Period, and while it wasn’t the biggest, it was fast. Uncover all sorts of interesting facts about the Velociraptor and dispel common dinosaur myths for your next trivia night!

How tall were velociraptors? Hollywood and movies like Jurassic Park lead us to believe various myths about dinosaurs. While Velociraptors are human-sized in some movies, this wasn’t the case in real life. In fact, this beast was only about six feet long and at most weighed around 30 pounds. They were around the size of a turkey, and some scientists have concluded that they only stood at 1.5 feet tall.

Sure, Velociraptors weren’t the tallest dinosaurs, but they were definitely speedy. So how fast did Velociraptors run? Scientists theorize they could hit speeds around 40 miles per hour! But they could only run this fast in bursts, so they were more of short-distance sprinters.

They Had Some Key Features

When it comes to the most interesting facts about Velociraptors, their key features certainly stand out. These Raptors used their speed, long claws, and rows of sharp teeth for hunting prey. Despite their small size, they certainly were a fearsome predator! One key feature was their three-inch-long middle claw that many suspect Velociraptors used for hunting.

Another key feature of this dinosaur was its feathers. While the beasts appeared winged, they could not fly. Instead, they had these feathers to regulate their body temperatures and perhaps look more attractive to potential mates. Yes, among the interesting facts about Velociraptors is the fact that they, too, looked for love.

So, what did these speedy beasts eat? The Velociraptor was a carnivore, meaning they ate meat. It’s likely they consumed small reptiles, dinosaurs, amphibians, mammals, and even insects. Their widely spaced teeth came in handy for catching prey.

How’d They Get Their Name?

Other fun facts about Velociraptors don’t only pertain to their size or hunting ability. Do you ever wonder how they got their name? The roots of this dinosaur’s name come from the Latin words “Velox” and raptor.” Velox means swift, while raptor means robber. In other words, their name literally means quick thief.

There Were Two Species

Like other beasts of the time, the Velociraptor was quite fascinating. The more you dig, the more interesting facts about the Velociraptor you uncover. Creative Beast Studio has raptor action figures for sale, so you can have your very own, realistic dino figurine! Fulfill your love of Velociraptors with an action figure you’ll always cherish!