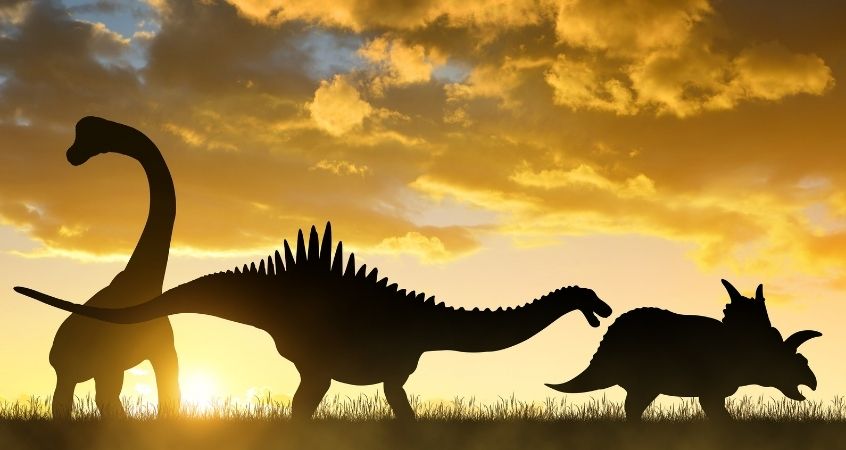 The Triassic Period: what a fascinating time! It was the first period of the Mesozoic Era and the time when dinosaurs began walking our planet. Earth looked pretty different during this period. The seven continents were still combined into one—Pangaea—and the landscape itself was vastly different. Discover five of the most interesting Triassic dinosaurs in this journey through the Triassic Period.

This dinosaur was on the smaller size, but it was still fearsome to other animals and small insects due to its razor-sharp claws and teeth. This species of dinosaur lived late in the Triassic Period, and paleontologists have discovered its fossils in South Africa, Zimbabwe, and the United States.

This giant herbivore lived in what we now know as South America. Interestingly, it wasn’t as large as many of the herbivores that come to a dino-lover’s mind; however, it was considered large for the time in which it lived. And just as fascinating is the fact that this beast was closely related to Melanorosaurus, which lived during the early Jurassic Period.

This sauropod lived late in the Triassic Period near the Los Colorados Formation in Argentina. Both its tail and neck were rather long, and it walked on four legs like some other dinosaurs of the time. However, scientists have yet to prove whether it was an omnivore; many theorize that this beast feasted on plants as well as meat.

If you love fearsome beasts, then you may want to add the Herrerasaurus to your list of favorites, as it was among the first dangerous predators of the time. It was nimble and swift, with strong claws that it used to grasp prey. This was also among the first dinosaur fossils discovered, making it all the more fascinating!

The last dinosaur we’ll discuss today is the Gojirasaurus. It was among the largest carnivorous dinosaurs of the time at a whopping 18 feet in length! The origins of this beast’s name are even more interesting—the name has the same roots as those of the cinematic monster Godzilla.

Diving into these five of the most interesting Triassic dinosaurs has been fun! If you love dinosaurs or have a dino-lover in your life, shop for beasts of the Mesozoic figures at Creative Beast Studio. All of our dinosaur action figures are realistically formed and colored. Browse our wide collection, and then pick out your favorite for purchase. Everyone loves a great dinosaur figure!